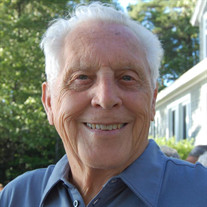 Richard W. Clark WINDHAM-- Richard &#8220;Dick&#8221; Wright Clark passed away in Naples, Florida at the age of 86 following the return of his cancer. Dick was born November, 1934 in Gray, son of the Rev. Clarence H. Clark and Beatrice Wright... View Obituary & Service Information

The family of Richard W. Clark created this Life Tributes page to make it easy to share your memories.

Send flowers to the Clark family.