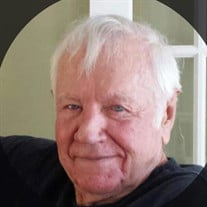 Westbrook, Richard “Dick” Brooks, 86, of Westbrook passed away on Monday, June 29, 2020 of natural causes at his home. He was born on August 12, 1933 in Portland to Sidney and Elizabeth (Wallace) Brooks. After High School, he attended University Of Maine at Orono and Maine Maritime Academy he then entered the Marine Corps. Dick retired from IBM after 30 years as an engineer. Dick loved gardening, running, racquetball, swimming, boating and traveling. He loved spending time with his family and he had a great sense of humor. Anyone that knew Dick knew he was the most patient, kind, understanding and positive human being one could know. He was the best husband, dad, grampy and uncle ever. Dick is survived by his loving wife of 60 years Yvonne (Christman) Brooks; daughter Susan Drew and her husband Mark; two granddaughters, Allison & Kathryn Drew; sister, Jo Anne Proctor; sister in law, Bernie Clancy and beloved nieces, nephews, and cousins throughout the country. Visitation will be held from 12:00 – 1:30PM Tuesday July 14th at the Westbrook Chapel of Dolby, Blais & Segee 35 Church Street, Westbrook. A graveside service will follow at 2:00PM at the St. Hyacinth Cemetery, Stroudwater Street, Westbrook.

The family of Richard "Dick" Brooks created this Life Tributes page to make it easy to share your memories.

Send flowers to the Brooks family.