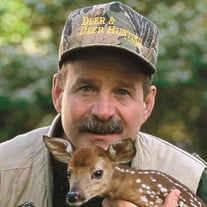 STANDISH - Richard G. Bernier, 62, took his final track in this life, which led him not to a white-tailed deer, but into eternity and to the arms of his savior, Jesus Christ, all in eagerness to hear these words, ‘Well done thou good and faithful servant.’ Although he lost his battle with cancer, it’s not how you die that is important; it is how you are remembered. Dick is best known throughout the deer hunting community as ‘The Deer Tracker.’ He literally forged his career from the animal he pursued, the white-tailed deer. Bernier became an award-winning writer, award winning nature photographer and highly sought-after prolific speaker. He authored seven best-selling books, wrote hundreds of magazine articles and shot thousands of images. R. G. served as the Northeast field editor for Deer & Deer Hunting magazine, contributing writer for Whitetail News, hunting editor for Outdoors magazine, and maintained a bi-monthly blog, www.bigwhitetail.wordpress.com. Dick loved being behind the lens of his camera capturing images of nature, especially deer & turkeys. He always maintained, “I’ve learned more about wildlife behavior from behind this camera than I could have in ten lifetimes with a weapon.” Bernier graduated in 1977 from Westbrook High School, where he was a three-sport athlete playing football, wrestling, and baseball. He attended Liberty University until a near fatal car accident upended further studies. In 1980 he married his high school sweetheart, best gal and best friend, Sharon M. Swendsen who survives him. Also surviving are his children, Dwight R. Bernier and wife, Jessica of Montreal, QC, Lindsay A. Jacob and husband Christopher of Standish, brother Thomas Bernier and wife, Astir of Westbrook and sister Deborah Girouard of Hollywood, FL, and several nieces and nephews. Those who knew R.G. best realized that although he successfully tracked down many whitetail bucks during his lifetime, and embraced the challenge, loving every minute of each chase, that is not what was most important in his life. He had a profound faith in Christ and spent his career as a public speaker communicating it to audiences all across America. And then there were grandkids. This grandfather was fond of stating, ‘On the eighth day of creation, God looked about in time forward for a grandfatherly image and pointed at him stating, and here he stands.’ Nehemiah, Malachi, Sadie, Stella, Lucas and Aubree became his greatest earthly treasures. He loved all six equally, affectionately, unequivocally and they all knew that they had gramps wrapped around their little fingers. In C.S. Lewis classic, Chronicles of Narnia, Dick more than personified the mouse named Reepicheep in how he lived life to its fullest with character, conviction and loyalty. He did not fear death because he knew that when he died, he would go to Aslan's Country, (Heaven) which was his one dream. He was seeking a homeland, and even if he had the opportunity to return, he desired a better country, that is, a heavenly one. “Where the waves grow sweet, Doubt not, Reepicheep, There is the utter East.” In the end, when they finally reached the edge of the world, Reepicheep implored Aslan (Jesus) to let him enter his country. Aslan allowed him to enter, telling him: - "My country was made for noble hearts such as yours.” The track that Dick is now on is a trail that will never end, one that he has prepared all his earthly life for and he is currently more alive now than he has ever been. Death is not an end but a beginning. Not a wall, but a door. Not an exit, but an entrance. Visiting hours will be held 4 to 7 p.m., Friday, August 13, 2021 at the Windham Chapel of Dolby, Blais & Segee, 434 River Road, Windham. A funeral will be held 10:30 a.m., Saturday, August 14 at the Windham Baptist Church, 973 River Road, Windham, with grave side Committal to follow at the North Gorham Cemetery. To express condolences or to participate in Richard’s online tribute please visit www.DolbyBlaisSegee.com In lieu of flowers, donations can be made to: Church 21, Inc. Attn: Bernier 77 Whites Bridge Road Standish, ME 04084

STANDISH - Richard G. Bernier, 62, took his final track in this life, which led him not to a white-tailed deer, but into eternity and to the arms of his savior, Jesus Christ, all in eagerness to hear these words, &#8216;Well done thou good... View Obituary & Service Information

The family of Richard G Bernier created this Life Tributes page to make it easy to share your memories.

Send flowers to the Bernier family.