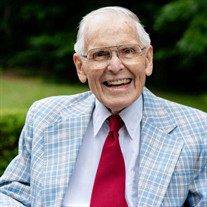 Gorham - Reverend Albin Theodore Ekholm, 94, went home to be with his Lord & Savior on Saturday, September 4, 2021. He was born into a Christian family on April 16, 1927 in Concord, NH, the third son of Ernest Albin Ekholm and Hildur Swaidmark Ekholm. "Ted" grew up in Concord. At nine years of age, his Mother helped him to ask Jesus to be his personal Savior. That decision changed the whole course of his life. At the age of fourteen, he made another life-transforming decision. He yielded to the call of God and gave his life to serve God in any way the Lord wanted. After graduating from Concord High School in 1945, he enrolled as a student at Gordon College of Theology & Missions in Boston. While there he ministered part-time in several churches, played his trombone in Gospel teams, sang in the College choir and the College male quartet. Upon graduation in 1949, he married Barbara L. Field, who also graduated in the class of '49. He and Barbara were married for 65 years. He enrolled in Gordon Divinity School in Brooklyn, MA, graduating in 1952 at the age of 25. The last year of Seminary was at the new campus in Wenham, MA. The school is now called Gordon Conwell Theological Seminary. Following graduation, he and his wife served the Lord in four Baptist Churches in Connecticut, Massachusetts, and Maine. He retired from the full-time ministry in 1990, but continued to preach at various churches. Since 2005, he led the summer worship services on Frye Island for ten Sundays, until he became ill in June 2019. "Pastor Ted" was a man who loved God, loved his wife and family, and loved people. Music was always an important part of his life. He especially loved hymns and Gospel songs. His life was filled with many challenges and blessings but he always gave glory to God. In addition to his parents, he was predeceased by his older brother, Carl, in 2004 and by his wife, Barbara, in 2015 and their oldest son, David, in 2008. He is survived by four children, Stephen Ekholm of Barrington, RI, Carole Ekholm of Woodstock, CT, Gloria Thomas of Buxton, ME and Glenn Ekholm of South Portland, a daughter-in-law, Susan Ekholm of South Portland, ME, a brother, Lloyd Ekholm & his wife, Marian, of Gilford, NH, twelve grandchildren – Ted, Chris, Betsy, Dan, Carl, Carissa, Christina, Molly, Matthew, Katie, Aaron and Kirsten; and eleven great-grandchildren, who meant the world to him, plus several dear nieces and nephews. A special thanks goes to Nikki Hansen and Scott Mason who have been a tremendous help and comfort to Pastor Ted especially during his last days. An informal visitation time will be held on Saturday, September 11, 2021 at the Gorham Chapel of Dolby, Blaise & Segee 76 State Street Gorham, ME from 5 – 7 p.m. A memorial service will be held at Galilee Baptist Church, 317 Main Street, Gorham, ME on Sunday, September 12, 2021 at 3:00 p.m. A brief burial service will be at Dow's Corner Cemetery, Standish, following the service. In lieu of flowers, gifts may be given in memory of Pastor Ted to Galilee Baptist Church for "The Rephidim Project", 317 Main St, Gorham, ME 04038.

Gorham - Reverend Albin Theodore Ekholm, 94, went home to be with his Lord & Savior on Saturday, September 4, 2021. He was born into a Christian family on April 16, 1927 in Concord, NH, the third son of Ernest Albin Ekholm and Hildur Swaidmark... View Obituary & Service Information

The family of Reverend A. Theodore Ekholm created this Life Tributes page to make it easy to share your memories.

Send flowers to the Ekholm family.