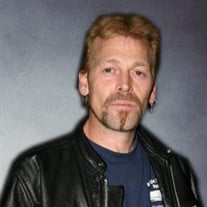 Raymond Leigh Thibodeau Jr., 56, of Scarborough, passed away on May 3, 2021. He was born on May 3, 1965 in Portland to parents Raymond Thibodeau Sr., and Martha (Griffin) Varney. Raymond, affectionately known as Razor by his friends and family, grew up in Gorham, one of five children. When he was in his 20’s he earned proudly earned his High School Diploma through an adult education program, walking the stage in his cap and gown. He worked from 2004 to 2017 for Atlantic Transport. Raymond was a very talented musician and vocalist and loved music of all genres and had an artistic flair that started in childhood. He was a great marksman and in his spare time liked to go to the shooting range, playing online games and making detailed models of Beechridge racecars. Raymond was a jack of all trades and always willing to lend a hand. His friends and family were very important to him, especially his only child, Kayla, and his Grandmother Barbara. Religion was also very important to Raymond, he was a God fearing man who was very interested in the Book of Enoch. Raymond will be remembered for having a kind and giving heart, he may have had a crusty outside, but he had a gooey middle. Raymond is survived by his mother, Martha, and her husband Linwood Varney, father, Raymond Thibodeau; daughter, Kayla Thibodeau and her daughter Shaylee; grandmother, Barbara Griffin; siblings, Timothy Thibodeau, Fred Thibodeau, Erica Bryant and Sarah Boote; his Aunt Beatie, Uncle Mike and three nieces and one nephew. Visiting hours will be held on Sunday, May 16, 2021 from 4:00pm to 6:00pm at Dolby, Blais & Segee Funeral Home, 434 River Road, Windham. In lieu of flowers, please consider a donation in Raymond’s name to the charity of your choice.

Raymond Leigh Thibodeau Jr., 56, of Scarborough, passed away on May 3, 2021. He was born on May 3, 1965 in Portland to parents Raymond Thibodeau Sr., and Martha (Griffin) Varney. Raymond, affectionately known as Razor by his friends and family,... View Obituary & Service Information

The family of Raymond Leigh Thibodeau Jr. created this Life Tributes page to make it easy to share your memories.