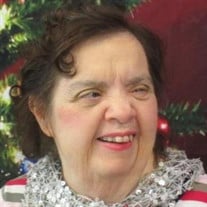 GORHAM & WESTBROOK – Rachel Marie Galipeau, loving daughter of Albert and Solange (Gaudreau) Galipeau passed away peacefully on February 25, 2021 at the Gorham House after living a life filled with joy and challenges. Rachel was 70 years old when she passed away, one more milestone that she reached as a person who was born with Down’s Syndrome. Rachel led a life filled with friends, especially at Goodwill where she worked and retired after 40 years! Her next adventure was at Community Skills where she enjoyed her cooking, art, and her days at World Partners. Rachel never missed an episode of Jeopardy or Wheel of Fortune with her sister, “Miss Elaine”, with whom she resided with for the past twelve years. She was outgoing, loving and enjoyed being around people, she especially loved music and her records. She could often be heard singing Patsy Cline songs at the of her lungs. Rachel was also a true artist from an early age. She created Christmas cards and paintings that she drew and painted, free hand. For four years in a row, her Christmas card became the official Christmas card for Goodwill. When diagnosed with Alzheimer’s, unfortunately these gifts started to wane. She never stopped giving hugs or saying “I love you”. Dedicated to her Catholic faith, mass was very important to Rachel as was the Rosary and the Blessed Mother. Rachel will be dearly missed but never forgotten. In addition to her parents, she was predeceased by her brother, Albert, Jr. She is survived by her sisters, Elaine Salamone, Jacqueline and her husband, James Fitzgerald; brothers, Peter Galipeau and his wife, Helen, John Galipeau and wife, Ann, James Galipeau and wife, Carol; several nieces including, Rebecca Coad and husband, Jeffrey as well as Adrienne and Marie Galipeau; nephews, James Galipeau, Andrew Galipeau, and John Galipeau; great-nephews, Nathan and Liam Coad. Her aunt and Godmother, Therese St. Pierre; aunt, Rose Sidebottom; several cousins, and many friends. The family would like to express their heartfelt gratitude to the staff of Gorham House as well as Beacon Hospice for their devoted care of Rachel. Rest in peace Minnie, you will always be in our hearts. Relatives and friends are invited to a public visitation 6 to 8 p.m., Tuesday, March 2, 2021 at the Westbrook Chapel of Dolby, Blais & Segee, 35 Church Street, Westbrook. A mass of Christian Burial will be held 10 a.m., Wednesday, March 3, 2021 at St. Anthony of Padua, 268 Brown Street, Westbrook. Those who wish to make a donation in memory of Rachel are encouraged to donate to the Community Skills Program at Goodwill Northern New England, 34 Hutcherson Drive, Gorham, ME 04038 or to the Gorham House, 50 New Portland Rd, Gorham, ME 04038.

The family of Rachel Marie Galipeau created this Life Tributes page to make it easy to share your memories.

Send flowers to the Galipeau family.