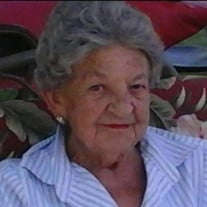 Limington Priscilla T. (Tanguay) Moulton, 87, was called home Friday August 27, 2021, after a brief and sudden illness. She was Born December 12, 1933, in Westbrook a daughter of Raoul and Rose (Arsenault) Tanguary. In 1954 she married Philip E. Moulton and together they raised nine children. Priscilla enjoyed beano and her trips to Oxford and Foxwoods Casino. She will be remembered as a sweet and caring person who was the glue that held the family together. Her smile, pies, fudge, and feisty ways will be missed dearly. In addition to her parents Priscilla was predeceased by her husband Philip and daughters Karen Linda and Theresa. She is survived by, her daughters, Bonnie Carignan of Hollis Center, Cynthia (John) Moulton of Pembroke, and Susan Cairns of Westbrook; sons, Philip (Diane) Moulton of Gorham, Darrell (Belinda) Moulton of Naples and Dennis (April) Moulton of Cornish; several grandchildren, and great grandchildren whom she adored; sister, Germaine Phinney of Limington, and brothers, Robert, Roland, Camil, Donald and Michael Tanguay. Priscilla’s family wishes to thank Mercy Hospital and all those who were involved in her care. She will be deeply missed. An hour of visitation will be held from 9:30AM – 10:30AM Thursday September 2, at the Westbrook Chapel of Dolby, Blais & Segee 35 Church Street, Westbrook. Following visitation, a Mass of Christian Burial will be celebrated at 11:00AM, at St. Hyacinth’s Church, St. Anthony of Padua Parish, 268 Brown Street, Westbrook. Following Mass interment will be held at St. Hyacinth Cemetery, Stroudwater Street, Westbrook.

Limington Priscilla T. (Tanguay) Moulton, 87, was called home Friday August 27, 2021, after a brief and sudden illness. She was Born December 12, 1933, in Westbrook a daughter of Raoul and Rose (Arsenault) Tanguary. In 1954 she married Philip... View Obituary & Service Information

The family of Priscilla T. Moulton created this Life Tributes page to make it easy to share your memories.

Send flowers to the Moulton family.