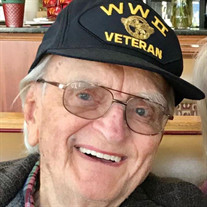 GORHAM - Philip W. Boothby, Sr., 96, of Gorham passed away at Maine Medical Center on July 24, 2021. He was born September 27, 1924 in Westbrook to Thomas R. and Grace (LeBrock) Boothby. He was a lifetime resident of Gorham. Phil was married to Glenna (Miner) Boothby for 60 years until her passing in 2010. Together they raised four children who survive them: Philip Jr., Mark (Debbie), Cynthia Boothby (John Drisko) and Nancy Fowler (Gary). Phil served in France and Germany during WW II and had many memories of his time there. He also organized and attended many Army reunions across the U.S. and one in Germany for the 581st AAA Battalion. He earned his GED upon his return from Europe and later received his high school diploma. Phil was also a 33rd degree Mason of Harmony Lodge. He worked in insurance, construction and real estate, retiring at the age of 85 from The Boothby Real Estate Agency. Phil spent summers with Glenna and the kids on Pequawket Lake in Limington at a camp he built, where many family gatherings were held. He especially enjoyed riding around the lake in his pontoon boat, having his last ride one week before his passing. Phil also enjoyed working with wood and built, as well as refinished, many pieces of furniture. He loved “puttering” in his yard doing leaf raking, snow shoveling and occasionally taking a golf cart ride to the bank and post office. He was predeceased by his parents and his siblings; Pauline, Russell, Austin, and Ethlyn; daughter-in-law, Debbie Boothby and great-grandsons, Ethan and Evan. He is also survived by his grandchildren; Laurie Willett, Todd Boothby, Ryan Boothby, Kevin Boothby, Katelyn Higgins, Kim Bersko, Jake Fowler, Kyle Fowler, Adam Fowler, Angela Fowler and their families including spouses; and 12 great-grandchildren. He is also survived by several nephews, nieces, and brothers and sisters-in-laws. The family would like to thank the staff at Avita Memory Care and Maine Medical Center for their compassionate care. Visiting hours are 1:00pm – 2:30pm on Saturday, August 7, 2021 at the Gorham Chapel of Dolby Blais & Segee, 76 State Street. Burial will be private.

GORHAM - Philip W. Boothby, Sr., 96, of Gorham passed away at Maine Medical Center on July 24, 2021. He was born September 27, 1924 in Westbrook to Thomas R. and Grace (LeBrock) Boothby. He was a lifetime resident of Gorham. Phil was married... View Obituary & Service Information

The family of Philip William Boothby Sr. created this Life Tributes page to make it easy to share your memories.

Send flowers to the Boothby family.