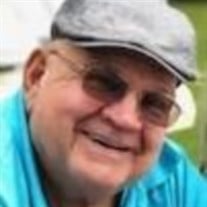 OXFORD – Peter M. Wuori, 77, of Oxford passed away Wednesday, December 8, 2021 at the Stephens Memorial Hospital, Norway due to COVID-19 complications. He was born on April 19, 1944, a son of Armas and Aili (Peiju) Wuori and graduated from Oxford Hills High School in 1962. Peter married his high school sweetheart Betty Sawyer Wuori on October 8, 1966. He served in the US Navy from 1965 until 1968. Peter enjoyed hunting, fishing, snowmobiling and was a former member of the Rock O Dundee Snowmobile Club. He loved to spend time with his family and friends. Peter also loved going to Oxford Plains Speedway and supporting local stock car racing along with NASCAR. Going to hunting camp with his buddies and great friend, Dave Shelton was another activity that he loved. Peter also looked forward to the Maple Sugar Season every year. Peter grew up in East Oxford on the family farm until he built his forever home for him and Betty up on the hill in 1972. He was predeceased by his parents; sister, Susan Ward and brother, Marti Wuori. Surviving beside his wife, Betty are his daughters, Stephanie Fowler and significant other, Greg Weston and Amy Wuori and significant other, Chuck Smith; grandchildren, Scott Thurlow, Kaytlyn Seymore and wife, Celeste, Jordyn Mecervier, Connor Weston, Grafton Weston, Cody Preble, and Cameron Smith; great-granddaughter, Amaira Thurlow; sister, Serena Dube; many nieces, nephews, in-laws and favorite aunt, Lahja DeBello. Celebration of Life will be held Saturday, January 8, 2021 from 11:00am until 3:00pm at the Mechanic Falls Legion Hall, 41 Elm Street, Mechanic Falls. In lieu of flowers, donations in his memory may be made to Mark J. Ward Scholarship Fund, 22 North Town Farm Road, Oxford, ME 04270.

OXFORD &#8211; Peter M. Wuori, 77, of Oxford passed away Wednesday, December 8, 2021 at the Stephens Memorial Hospital, Norway due to COVID-19 complications. He was born on April 19, 1944, a son of Armas and Aili (Peiju) Wuori and graduated... View Obituary & Service Information

The family of Peter Michael Wuori created this Life Tributes page to make it easy to share your memories.

Send flowers to the Wuori family.