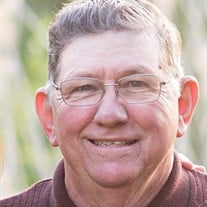 Peter Roberge, 79, died on Monday September 6, 2021, at Gosnell Memorial Hospice in Scarborough. He was born April 19, 1942, in Portland, son of the late Philodore and Florence (Jagger) Roberge. Peter graduated from South Portland High School, Class of 1961. After graduation he proudly served in the US Navy on the destroyers USS Tills & USS The Sullivans. After the Navy he married the love of his life, Marilyn A. Sass on June 22, 1968 and settled in South Portland with their two daughters, Denise & Jackie, until moving to Windham in 1998. He worked as a Pressman for over 40 years, a job he loved and was deeply proud of doing. He and his brother, Dick, were season ticket holders for the Maine Mariners hockey team. Pete enjoyed watching NASCAR, especially races he was able to attend at NH International Raceway. He loved classic cars and owned many but his pride & joy was his 1939 Pontiac. He attended car shows & cruises for years making many dear friends along the way. For years they would all look forward to their Saturday night get-togethers. In addition to his parents, he was predeceased by a brother, Roger Roberge, a sister-in-law Linda Roberge, his in-laws Arpad & Lucille (Lewis) Sass, and a sister & brother-in-law, Richard & Barbara Munson. In addition to his wife, Marilyn, he is survived by his daughters Denise LaFerriere & her husband, Glenn, of Windham & their children Alex LaFerriere of Windham & Paige LaFerriere of Albany, NY, his daughter Jacqueline Webber & her husband, Terry Jr, of Gorham & their sons, Patrick Webber of Standish, Terry Webber III of Portland & Shane Webber of Gorham. A brother, Richard Roberge of Gorham, a sister-in-law Margaret Roberge of Auburn, brothers & sisters-in-law Kenneth & Janet Matthews of Raymond & Bradley & Judith Sass of Homosassa, FL, and 14 beloved nieces & nephews & their families. Visiting hours will be held from 4:30 – 6:30 pm on Monday, September 13, at Dolby, Blais & Segee 434 River Rd. Windham. A graveside service will be at Forest City Cemetery on Lincoln St. South Portland on Tuesday, September 14th at 10 am. In lieu of flowers donations may be made in Peter’s name to The Barron Center Adult Day Program Attn: Julie Prevost-Lucci 1145 Brighton Ave. Portland, ME 04102.

The family of Peter Stephen Roberge created this Life Tributes page to make it easy to share your memories.

Send flowers to the Roberge family.