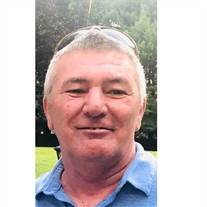 Peter Shaun Martin (Pete), 61, died unexpectedly August 28, 2021 at his home in Gorham, Maine. He was born June 26, 1960 in Portland, Maine, the son of the late Joseph and Mary Arlean Martin. Peter grew up on Skilling St. (Cash Corner) in South Portland. He graduated from South Portland High School in 1979. Peter worked as a CAD designer in facilities at UNUM for over 30 years. He married his former wife, Angela Pecoraro, in 1988, and they were blessed with two beautiful children, Joseph and Samantha. Peter was an avid hunter, raised German Shepard’s, and had a life-long passion for Harley Davidsons. He had many adventures with his fellow comrades and loved to have the wind beneath his wings with his fellow riders. Peter’s greatest joy was his children, Joey and Sammy. He was so proud of their many achievements, each graduating college, his son becoming a nurse, his daughter’s recent marriage; he was particularly proud of their service to their country. He was also especially thrilled to learn from Samantha and Matt that he was going to be a grandfather for the first time. Peter is predeceased by his parents, Joseph and Mary Martin. Surviving are his children, Joseph John Martin, of Buxton, Samantha Ellen Martin-Ryan and Son-in-law Matt Ryan, of Philadelphia, PA, former wife and friend, Angel Pecoraro and husband David Stearns of St. Pete Beach, FL, and his beloved four-legged companion, Harley. Surviving are Peter’s eight wonderful brothers and sisters and their families; Brother Michael Martin and wife Pamela, of Scarborough, brother Steven Martin and wife Mary, of Standish, sister Denise Martin, of Gray, sister Patrice Martin and husband John, of Cumberland Foreside, brother Marc Martin and wife Linda, of Buxton, sister Lisa Ciriello and husband Tony, of Saco, brother William Campbell, of Scarborough, sister Maureen Pattee, of Portland, and his beloved nephew who was more like a brother, Lawrence Robinson and wife Laura, of Portland. Peter was also blessed with numerous nieces and nephews whom he loved very much. Peter was always the life of the party and had many wonderful friends who supported him, especially David and Rhonda Laughlin, of Gorham, with whom he had a special bond. A service will be held on Friday, September 3, 2021, at Dolby Blais & Segee Funeral Home, 76 State St, Gorham, ME, at 3 p.m. with a celebration of life to follow. An hour of visitation will be held prior to the service from 2 - 3 p.m.

The family of Peter Shaun Martin created this Life Tributes page to make it easy to share your memories.

Send flowers to the Martin family.