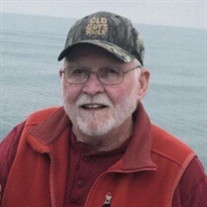 Peter (Butch) J. James, 74, of Windham, ME died Monday, January 24, 2022 at Maine Medical Center from a long illness complicated by COVID-19. Peter was born June 19, 1947 in Westbrook, ME to John J. James and Grace L. (Moreau) James. He graduated from Windham High School in the class of 1965. He joined the Naval Reserve in his junior year of high school. Immediately after high school he went into active service. Peter was trained in Newport, RI and then moved to the west coast. He was a Machinist Mate of the US Navy and served aboard a destroyer, the USS Fechteler DD870 out of San Francisco, CA. and served in the Pacific during the Vietnam War. He received medals awarded for National Defense Service, Vietnam Service and Vietnam Campaign. He married Marlene J. Bell on July 6, 1968. Together they raised their two daughters in Windham. After his military service he worked in the Maintenance Department at Crosby Laughlin in Portland for 20 years. He worked briefly at Hillside Acme and S.D. Warren in Westbrook. Peter retired from Parker Nichols-Portland in 2010 after20 years of working as a Millwright. However, his favorite job was being a “Papa” to both his granddaughters and following their soccer, basketball, softball and lacrosse games. Peter’s retirement years were spent fishing with both his sons-in-law, hunting with his son-in-law, spending time with and chasing both granddaughters at their many sporting events. He loved fishing on Sebago Lake with family and his close friend Jesse (and they always talked about the big one that got away), and was known by many as “Papa Smurf”. He also enjoyed watching NASCAR, camping with family, he finally bought his dream truck (1946 Chevrolet Hot Rod) showing his kids that “Old Guys Rule” but they prefer to call Dad “The Legend”, spending mornings with his McDonald coffee buddies, and relaxing with his favorite four-legged companion, Belle. He was a member of Sportsman’s Alliance of Maine, Pine Tree Rod & Gun Club, Buxton Rod & Gun Club, Kora Shrine, Presumpscot Lodge #70, American Legion Post No. 0148, and VFW Post 10643. He leaves behind his loving wife Marlene J. (Bell) of 53 years, his daughters, Crystal M. and husband William W. Johnson Jr. of Standish and Bobbi J. and husband Shawn P. Kennie of Windham; his granddaughters Taylor M. Johnson of Standish and Devan E. Kennie of Windham; siblings, Donna Keaten of Gray, John James of California, Johanna Smith of Gray, Pheobe Bernier of Gray, Jacklyn Allen of Gray, and Jesse James of Nevada and a sister-in-law, Loma L. Bell of Gorham. He is predeceased by his parents and brother, James James. Our family would like to thank the staff at Maine Medical Center, Portland, for the care of Peter. Also, a special thank you to “Dr. P” (Dr. Jennifer Palmenteri) for her kindness, compassion and care of him through this ordeal. We will forever be grateful. An hour of visitation will be held February 2, 2022, 4-5pm at Dolby, Blais & Segee, 434 River Road, Windham, ME. Masks are highly encouraged and will be handed out at the door. A funeral service will be held with Military Honors directly after visiting hours. A graveside burial will take place in the spring at Hillside Cemetery, Huston Road, Gorham, ME. In lieu of flowers, donations can be made to: VFW, PO Box 1776, Windham, ME 04062.

The family of Peter J. James created this Life Tributes page to make it easy to share your memories.

Send flowers to the James family.