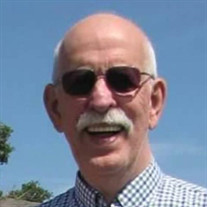 Peter Robert Davis 1939-2021 Windham, Maine. Peter Robert Davis (81), of 20 Conifer Drive, Windham, and recently of Ocala, Florida, passed away on January 3, 2021, at Maine Medical Center with his loved ones by his side. Peter was born in Gorham, Maine on September, 7 1939, to Gladys VanTassel Davis and George Peter Davis. Peter attended Gorham schools, graduating from Gorham High school, after which he enlisted in the US Army in 1959. After serving three years in the Army, stationed in Aschaffenburg, Germany, Peter returned home in 1962 and pursued several job opportunities. He met and married Deborah Tracy, also from Gorham, and they began their little family. He and Deborah both decided to go on to college starting with one class at a time. and eventually they each earned a bachelor’s degree from the University of Southern Maine in 1973. Peter then went on to become first a reading teacher and then sixth grade teacher at Village School in Gorham. Upon leaving teaching, Peter became a corrections officer at the Maine Correctional Center. Peter loved his family! He took great pleasure in his children’s accomplishments in life, and he was especially proud of his four granddaughters who live in Maryland. He enjoyed his “Thursday morning breakfasts” with his brother Bud and his cousin Jack! Peter enjoyed camping with his family, starting with a small tent and progressing to an RV. A favorite camping spot was South Arm Camp Ground in Andover, Maine. He also enjoyed traveling with Deborah to Europe on several occasions. He especially enjoyed going back to Germany, where he had been stationed in the Army, and visiting people he had grown to know and love in Aschaffenburg. After retiring, Peter and his wife took the RV to Arizona and back to Maine, enjoying the many beautiful places our country has to offer. Also after retiring, Peter and Deborah moved to Ocala, Florida and lived in a wonderful Retirement community called SummerGlen for 8 1/2 years. Enjoying the warm weather and the easy life, they traveled to Key West, St. Augustine, Tampa, and many other great places in sunny Florida! Peter is survived by his wife of 56 years, Deborah; his daughter, Pamela Davis and her husband Richard Thompson of Gray; his son Daniel Davis of White Hall, MD, and his partner Cheri Zimmerman; his four granddaughters: Marina Davis of Owens Mills, MD, Juliana Davis of White Hall, MD, Giovanna Davis of White Hall, MD, and Isabella Davis of White Hall and Salisbury MD; his brother, George Davis and his wife Lydia Davis of Gorham; his sister-in -law, Penny Nason and her husband George Nason of Gorham, and several nieces and nephews. Peter was predeceased by his mother, Gladys VanTassel Davis, his father George P. Davis, his brother Charles E. Davis, and his brother Darryl Davis and a niece, Christa Davis Brown. Peter’s family would like to thank the nurses, doctors and staff at Maine Medical Center for their expert, loving, and conscientious care of our beloved husband, father, grandfather, uncle, brother and cousin. An hour of visitation will be held on Saturday, August 7, 2021 from 11:00am until 12:00noon at the Windham Chapel of Dolby Blais & Segee, 434 River Road, Windham followed by a memorial service at noon. Burial will be at the North Street Cemetery, Gorham. Donations in Peter’s name may be made to : Myotonic Dystrophy Foundation at 663 Thirteenth Street, Suite 100, Oakland, CA. 94612 or to your favorite Animal Refuge or Shelter.

Peter Robert Davis 1939-2021 Windham, Maine. Peter Robert Davis (81), of 20 Conifer Drive, Windham, and recently of Ocala, Florida, passed away on January 3, 2021, at Maine Medical Center with his loved ones by his side. Peter was... View Obituary & Service Information

The family of Peter Robert Davis created this Life Tributes page to make it easy to share your memories.

Send flowers to the Davis family.