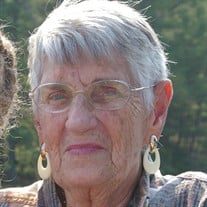 NORTH GORHAM—On April 21, 2021, Perces Louise Phinney “Nana” Merrifield passed away at home at the age of 93. Perces was born February 22, 1928 in South Windham, to Charles and Lillius Phinney. On May 30, 1947, she married Lawrence Moses Merrifield. Settling in North Gorham they raised 7 children; 2 daughters and 5 sons. Known by most as “Nana”, Perces’ favorite place was “The River,” a family gathering place on Dundee Pond. She spent summers there with her children, grandchildren and great grandchildren for more than 65 years. Throughout the years, she was involved in the 4-H Sewing Club and the Campfire Girls. Rooted in the North Gorham community, she and her husband Lawrence were regular faces at North Gorham Days where they often made and served fifteen gallons of homemade Ice Cream. In their younger years, they enjoyed dancing at the Highland Grove Dance Hall where Perces often wore dresses she had made. Perces was a “Homemaker” in the true sense of the word, being sure to always have a comfortable home and meals for the entire family, no matter what the task of the day was she tackled it head on, and “Her way”. Perces enjoyed crafting and sewing, many may remember her pop up store, Shavings and Lint. She loved country music and her Cowboys, especially George Strait. Perces also leaves behind two life-long friends, Jeanette Porter and JoJo Burrows. There was seldom a day when she and Jeanette did not talk, and in the early days there was a well-worn path thru the field from house to house. JoJo could be found on the dance floor at the Highland Grove Dance Hall and was apt to show up at the door for a last minute road trip. Perces was predeceased by her husband, Lawrence Sr. January 24th ,2003. She is survived by her seven children, Lawrence, Lance, Lynn, Leslie, Lawri, Lindy and Lyle as well as 17 grandchildren, 14 great grandchildren and 1 more on the way. At a later date, the family will gather at “The River” per her request to enjoy coffee made over the campfire at 5am to celebrate her life. In lieu of flowers, donations may be made in her honor to the Animal Refuge League of Greater Portland, PO Box 336, Westbrook, ME 04098 or to a charity of your choice. Arrangements are in the care of the Windham Chapel of Dolby Blais & Segee, 434 River Rd., Windham, ME 04062.

The family of Perces L. (Phinney) Merrifield created this Life Tributes page to make it easy to share your memories.

Send flowers to the Merrifield family.