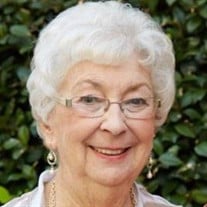 WINDHAM—Pauline (Brewer) Peters, 87, passed away surrounded by her family on November 30, 2020. She was born in Augusta, Maine on May 10, 1933, the daughter of Fred W. and Ruth (Perkins) Brewer. As a teenager, she helped her father with his dairy business by training drivers on the milk truck or helping her sister in the office. She attended schools in Augusta and graduated from Cony High School in 1951. Upon graduation, she went to work for New England Telephone in Augusta, later transferring to Springfield, MA and marrying Richard E. Peters in 1953. Two years later they returned to Maine to start their family. She devoted the next 18 years to raising their children. Later in life, after working for A.R.A. Services at the University of Southern Maine for 12 years, she retired in 1989 allowing her and Richard to go to Florida. Pauline enjoyed doing all kinds of crafts, camping with family, and square dancing. She was a member of the Parents Teachers Association at Dora L. Small School in South Portland. While residing in Florida, she was a member of the Red Hat group and assisted her husband in organizing their communities’ shuffle-board games for over ten years. She enjoyed gardening and was an active member in the Garden Club for many years. Most of all, Pauline loved spending time with her children, grandchildren and friends. Pauline is survived by her children, Bruce R. Peters and his wife Rachel of Centreville, VA, Bryan A. Peters and wife Wendy of Ellington, CT, Barry F. Peters and wife Kris of Orono, MN, Ann Marie Wilson and husband Paul of Glencoe, AR, and Brenda L. Brown and husband James of Windham, ME; her sister, Janet Sawyer and husband Gaylen of Belmont, NH, grandchildren, Leann Holding, Joanna Williamson, Elizabeth Bartholomew, Stephen Peters, Christopher and Brandon Brown, and Sophie, Lauren, Harper and Riley Peters; ten great-grandchildren and two great-great-grandchildren, nieces, nephews, and cousins. She was predeceased by her husband of 65 years, Richard Peters; siblings, Joyce Gray, Warren Brewer, Roger Brewer and Carol Boles. A memorial service will be held on Saturday, May 15 at 10am at the Windham Chapel of Dolby Blais & Segee, 434 River Rd., Windham, ME 04062. In lieu of flowers contributions can be made to Northern Light Home Care & Hospice, PO Box 679, Portland, ME 04104.

WINDHAM&#8212;Pauline (Brewer) Peters, 87, passed away surrounded by her family on November 30, 2020. She was born in Augusta, Maine on May 10, 1933, the daughter of Fred W. and Ruth (Perkins) Brewer. As a teenager, she helped her father with... View Obituary & Service Information

The family of Pauline Brewer Peters created this Life Tributes page to make it easy to share your memories.

Send flowers to the Peters family.