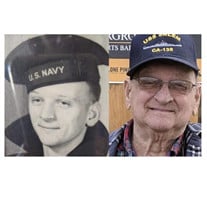 Paul E. Lavigne I, 88, of Denmark, formerly of Westbrook, passed away peacefully on February 16, 2021. He was born on October 20,1932 in Westbrook, Maine to Ovide and Donalda (Duclos) Lavigne. Paul had one brother, Laurent, and four sisters, Pauline, Cecile, Frances, and Lucille. In 1950, Paul listed in the United States Navy as an SN-2 and served in the USS Salem until 1954. On June 27, 1958, he married Joan D. Colpritt. Together they raised one son, Paul, and three daughters, Theresa, Susan, and Deborah. In September 1954 Paul became employed by S.D. Warren Company where he worked for 38 years before retiring in August 1992. He worked in the shipping and receiving department, and the building he used to work out of is now known as the Stockhouse Restaurant and Sports. Paul had a passion for gardening, and loved to grow all kinds of vegetables. When his children were kids he would have them go house to house selling vegetables so they wouldn’t go to waste. Paul also loved to take fishing trips with his son, take trips to Sebago Lake State Park every weekend with his family, and Christmas get togethers. As time went on, one of his favorite past times was seeing all the friends he made at McDonald’s in Westbrook and Bridgton. Paul and his wife would often take trips to Florida where they ended up becoming residents in the late 1990s. They would drive back to Maine and visit and on their way back they would make a trip to Kansas to visit their daughter, Theresa and her family. He also had some great memories of all his grandchildren and great grandchildren. Paul was also a member of the American Legion Post 197 for many years until he died. He was a very devoted husband to his wife, loved her unconditionally and took care of her when she became ill. Paul had a great smile that lit up the room, a great sense of humor and was very kind and considerate to all. Paul was preceded in death by his wife Joan, father Ovide, mother Donalda, brother Laurent, and sister Cecile. He is survived by his four children; Paul E. Lavigne II and Bonnie Ruotolo of Westbrook, Theresa Lesher and husband Scott of Kansas, Susan Sawyer and husband David of Gorham, and Deborah Blais and husband Christopher of Denmark; nine grandchildren, and twelve great grandchildren; sisters, Pauline Leborgne of Saco, Frances Gray and husband Bradley of Florida, and Lucile Leighton and husband Wilfred of Florida. A graveside service will be held in the spring.

Paul E. Lavigne I, 88, of Denmark, formerly of Westbrook, passed away peacefully on February 16, 2021. He was born on October 20,1932 in Westbrook, Maine to Ovide and Donalda (Duclos) Lavigne. Paul had one brother, Laurent, and four sisters,... View Obituary & Service Information

The family of Paul E. Lavigne created this Life Tributes page to make it easy to share your memories.

Paul E. Lavigne I, 88, of Denmark, formerly of Westbrook, passed...

Send flowers to the Lavigne family.