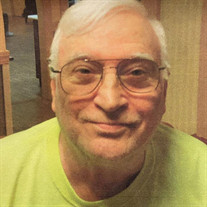 Paul Jean Lambert Sr passed away on March 23, 2022 surrounded by his family, after a long battle with Alzheimer’s. Paul was born on November 20th, 1941, son of Rose and Robert Lambert. He graduated from Westbrook High School in 1961. His early career started as a grocery bagger at Sampson’s in Westbrook. There, he worked his way up to management where he oversaw several locations until the chain closed. Paul had various other jobs in between this season- including working for Empire Gas, and Fiber Materials in Biddeford. He later began work with Walmart, where he finished out his working career until retirement. Paul was an avid outdoorsman. He loved every activity possible in nature. The family fondly remembers him panning for gold, hunting, fishing, hiking, and camping. Some of their favorite memories were made with him on Little Ossipee Pond, where he resided for many years in Waterboro. Paul’s love for the outdoors was almost equally matched by his love for animals. This love, he passed down to his children. Over his lifetime he had many pets. Paul had various cats (he couldn’t say no to a stray), along with his canine companion, Nugget, who would go everywhere with him. Paul is preceded in death by his parents Rose (LaBreque) and Robert Lambert. His sister Anita (Ta Tante) Lambert , and his brothers Paul Gerard Lambert and George Lambert. He is survived by his two children whom he had with his previous wife Martha (Lunt) Francoeur: Paul Lambert Jr and his wife Susan, Dianne (Lambert) Liesen and her husband Jim; His two step children Vanessa and Tony DeWitt, children of his previous wife Darlene. His sisters Irene Berch, Helene Sprague and her husband Lynn, and Marie Cardinal and her husband Don. He is also survived by his eight grandchildren: Paul Jrs children ; Kristin Jeffery and her husband Brendan, Carolyn Whalen and her husband Alex, and Joseph Lambert ; Dianne’s children Nicole Burris and husband Jason, Dylan Nighswander and fiancé Amanda, Lacey Nighswander and husband Victor, Zachary Liesen and Jamie Liesen; Three great grandchildren Gabriel, Helena, and Adeline, children of Kristin and Brendan Jeffery. Paul is most known by, and will always be remembered for, his bright grin, unique laugh, and endless humor. Even when Alzheimers had erased many aspects of him, he still had a smile for everyone. His long term caregivers at Sedgewood Commons all loved him. The family was touched to hear all the stories they would share about his mischievous humor and sunny disposition. He stayed playful until the end, and that is the Paul his family have always known and loved. Anyone who met Paul will hear that laugh, and see his endearing grin forever. Go rest high on that mountain.

Paul Jean Lambert Sr passed away on March 23, 2022 surrounded by his family, after a long battle with Alzheimer&#8217;s. Paul was born on November 20th, 1941, son of Rose and Robert Lambert. He graduated from Westbrook High School in 1961. His... View Obituary & Service Information

The family of Paul J. Lambert created this Life Tributes page to make it easy to share your memories.

Send flowers to the Lambert family.