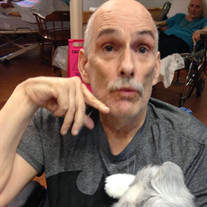 Norm was the 3rd of 4, born to Raymond L. & Theresa (Dufour) Cote and was raised in Westbrook and attended Westbrook Schools. He was named Norman Edward by Dr. Dyhberg, a well known Dr. in Westbrook at the time, who asked if he could have the honor of naming him, telling his mother she delivered adorable babies. In his parents eyes he could do no wrong, and if he did it meant someone else put him up to it. In many cases one of his siblings probably did! He didn't fear the threat of the stick behind the stove, knowing he wouldn't get it but one of/or all of his siblings would! One time his siblings got in more trouble than he did for laughing when in church he took his rosary beads, twirled them in the air yelling out loud “hold on Jesus you're going for a ride”. He was a well known figure on street corners around town, always watching what was going on. Of course, he would tell you he was there to direct traffic. He rode his bicycle everywhere, many times to Old Orchard Beach and back. A long distance rider long before it became popular. He trusted everyone, even those who took advantage of him. Being kindhearted, he would even buy you expensive jewelry if you asked without knowing/caring the cost. He loved pizza, Italian sandwiches, fried clams, all things Harley Davidson, his cat Mittens, and could solve 100 word search puzzles in a day. He swore like a pirate even with his mother's threats she would wash his mouth out with soap. And that would have been old fashioned strong Fells Knapter Soap! He is survived by his siblings Mary Ellen of Annapolis, MD, Mark and spouse Lori of Leland, NC and Ann-Marie and spouse Bryan of North Yarmouth, nephews Justin, James, Christopher and Matthew, nieces Sarah and Emily. As well as a very good friend Jane. In Lieu of flowers donations can be made to: Barron Center Residence Fund, 1145 Brighton Ave, Portland, ME 04102.

Norm was the 3rd of 4, born to Raymond L. & Theresa (Dufour) Cote and was raised in Westbrook and attended Westbrook Schools. He was named Norman Edward by Dr. Dyhberg, a well known Dr. in Westbrook at the time, who asked if he could have... View Obituary & Service Information

The family of Norman Edward Cote created this Life Tributes page to make it easy to share your memories.

Send flowers to the Cote family.