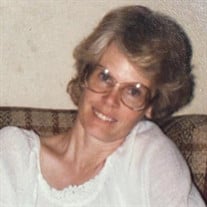 WESTBROOK- Nancylee Terwilliger, 76, passed away at her home in Westbrook on June 4, 2020. Nancylee was born in Brooklyn, New York on August 2, 1943, the oldest of four children of Lionel and Nancy (Cutter) Trudeau. She grew up in Wantagh, NY, on Long Island. Nancylee was baptized as one of Jehovah’s Witnesses in April of 1957 and graduated from Wantagh High School in 1961. During the summer she graduated, the family took a vacation to a little resort camp in Maine. While in Maine, she attended a meeting at the Kingdom Hall of Jehovah’s Witnesses in Portland, and there she met a group of young people with whom she had many similar interests. Nancylee enjoyed Maine and her friends so much, she never actually went back to New York after the trip! It was among this group of new friends that she met her future husband, Eugene Terwilliger. The two married May 12, 1963, and enjoyed more than 48 years of marriage, until Gene’s death in November 2011. Gene and Nancylee had four children, two boys and two girls: Jolyon, Nyree, and fraternal twins Kezia and Devin. As a family, the Terwilligers loved to camp. Nancylee was especially fond of Lily Bay State Park, near Greenville, as well as many of maritime Canada’s beautiful places. She had a quick wit which, coupled with an offbeat sense of humor, sometimes left brows furrowed and eyes rolled. Music always held a special place in Nancylee’s heart, and she was rarely without a good book. Nancylee will be remembered, too, for her generous nature. Her home, frequently referred to as the “Terwilliger Inn,” was always open to friends from near and far, whether they needed a place to stay for a night or a month. It was motherhood, however, that defined Nancylee. Nancylee was observant – always attuned to the unique talents and traits that each of her children possessed. Nancylee tried to fill the lives of her children with fun and music, with imagination and adventure. She loved her children intensely, and wanted them to experience, to really savor life and the beautiful world around them. But more than anything else, she hoped that by instilling the same appreciation for Bible principles that she had, her children would be equipped to make good decisions in life. She is survived by her children, Jolyon Terwilliger, Nyree Young, Kezia Witham, and Devin Terwilliger; her siblings, Lucille Trudeau and Geoffrey Trudeau; and three grandchildren. She was predeceased by her beloved husband, Eugene Terwilliger, in 2011, and her youngest sister, Denise, in 2012. Nancylee’s family is planning a memorial service on Saturday, June 13, 2020, at 5:00pm.

WESTBROOK- Nancylee Terwilliger, 76, passed away at her home in Westbrook on June 4, 2020. Nancylee was born in Brooklyn, New York on August 2, 1943, the oldest of four children of Lionel and Nancy (Cutter) Trudeau. She grew up in Wantagh,... View Obituary & Service Information

The family of Nancylee Terwilliger created this Life Tributes page to make it easy to share your memories.

WESTBROOK- Nancylee Terwilliger, 76, passed away at her home...

Send flowers to the Terwilliger family.