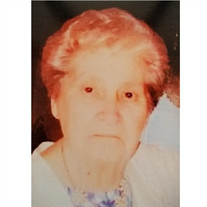 SCARBOROUGH - Monnie Jean (Swett) Cofone, 80, passed away July 1, 2021 at Gosnell Memorial Hospice House. She was born in Brewer, Maine on October 10, 1940, daughter of William F. Swett and Gwendolyn Davenport. She graduated from Berwick Academy in Berwick, Maine. She attended Valley Forge Christian College where she met the love of her life, Rev. Samuel J Cofone. Together they served the lord for many years in many different churches. She also worked as an accountant at several different banks. She retired at age 74 from NorDx in Scarborough. She was predeceased by her parents; husband of 43 years; brothers, Gary Swett, Bucky Davenport; and a sister, Robyn Smith. She is survived by her daughter, Monnie Petty and husband, Kevin from Lakeland, Florida; their children, Dominic (Jacquie), Daniel (Silvia), Justin (Amber) Brooke; her son, Samuel Cofone, Jr, his wife, Diana of Scarborough; their children, Trista, Samantha, and Anthony; her daughter, Constance Nevers and husband, Jeff of Yarmouth; their children, Amanda, Stephanie, Nicholas, and Scot; 9 great-grandchildren; brother, David Swett; sisters, Kelly Duncan, Kasi Swett, and Sandra Davenport; a special cousin, Sharon Parks of Texas; and special sister-in-law, Christine Swett of Long Island. The family would like to thank the staff of Beacon Hospice and staff at the Gosnell Memorial Hospice House. A funeral will be held 11 a.m., Saturday, July 10 at Emmanuel Assembly of God, 1571 Washington Ave, Portland. The Rev. Kenneth Wilcox will officiate. Burial will follow at Woodlawn Cemetery, Westbrook. If lieu of flowers contributions may be made in memory of Monnie to a charity of your choice.

The family of Monnie Jean Cofone created this Life Tributes page to make it easy to share your memories.

Send flowers to the Cofone family.