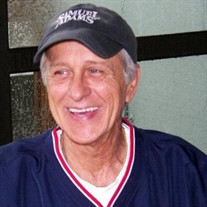 WESTBROOK - Michael Lee Fusco, 69, (let us pray), devoted husband, dad, grampy, bam-bam, and friend to many, passed away on March 9, 2021. Michael was born in Portland, Maine on June 16, 1951, the son of John C. Fusco and Jean E. Cairns. He grew up in Westbrook and the “hill” and graduated from Westbrook High School. Michael married Kerry L Segler in 1972, residing in Westbrook and they had a daughter, Katrina Greeley and son, Michael Fusco. They also had a bonus daughter, Christine Cheney-Bernier. He cherished (at times) his grandchildren, Emily and Brendan Greeley, Tyler Fusco, Nathan and Chelsea Tuttle and Will Segler; along with his great-grandchildren, Areella and Parker. Michael worked for Pine State Elevator Co. as an elevator mechanic before retiring due to disabilities. Michael loved vacationing in Florida, Hawaii and cruising. In other words, he loved going where it was warm! He was a “MacGyver” and if you needed anything fixed he would always be there for you and figure it out. He was also the camera guy, always capturing family moments on camera and tape to allow friends and relatives to have the most cherished memories. He was known by his many friends as “Mikie” and “Papa Fusco” because he cared for everyone. He will be greatly missed by his many friends and relatives and especially his wife, Kerry who lost a part of her heart that day he passed. We know Michael is basking in the sun in Florida or out somewhere fishing catching the “BIG ONE”. Right now he is saying “4:19 gotta go” In lieu of flowers, memorial donations may be made in Michael’s memory to the American Cancer Society (donate3.cancer.org). A Celebration of Michael’s Life will be held on Sunday, June 6, 2021, 1PM to 5PM, at the Italian Heritage Club, 40 Westland Ave, Portland, Maine.

The family of Michael Lee Fusco created this Life Tributes page to make it easy to share your memories.

Send flowers to the Fusco family.