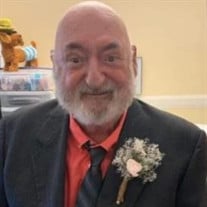 GORHAM—Merle Jay Mooney, 77, passed away peacefully, knowing that his family loved him very much, on January 27, 2021 at Maine Medical Center. He was born March 12, 1943, the son of the late Stanwood A. Mooney, Sr and Lorena H. Woods. Merle grew up in Portland, Maine and attended local schools. On August 7, 1964, he married Pamela Berry and they had two daughters, Dawn and June. Merle held several jobs throughout the years including driving bus for Metro Bus system in Portland, driving truck for Blue Rock industries, driving for Maine Armored car service and was a Foreman in the shipping department at Commercial Distributors which he enjoyed for many successful years. Merle was also a self-taught, skilled woodworker/carpenter who could build and create anything he desired. His family has countless creations of his including lawn ornaments and birdhouses. Some of his favorite pastimes include camping with family and friends at Wassampski Springs, hunting, fishing, and simply enjoying the outdoors with everyone. He was an avid Red Sox fan. Merle was a family man who taught countless people, including family and friends how to dance the waltz. Merle loved a good slice of chocolate pie and much preferred having a hot baked potatoe with what seemed like a pound of butter. At Christmas, he was famous for his Christmas present antics, always playing a joke on the young ones. A storyteller, he easily captured the hearts of anyone that would listen. Over the last years, the staff and fellow residents at Gorham House became a very captive audience for him. Merle was predeceased by his siblings, Mabel Mooney, Daniel Mooney and Daniels twin brother Donald. He is survived by his loving and devoted wife of 56 years, Pamela Mooney; his daughters, Dawn Mooney Powers and her husband Daniel, June Mooney Butterfield and her husband Michael Butterfield Jr.; his grandchildren, Ashlee Butterfield McKenney and her husband Christopher, Tad Butterfield and his wife Katelyn, Nikolle Conrad, and three great grandchildren, Jeremy and Sophia Butterfield and Emersyn McKenney; his brothers Francis Carignan and his wife Barbara, Peter Crepeau, as well as other half siblings; and his beloved dog, Jack. The family would like to thank the staff at the Gorham House for their excellent care. A private memorial service will be held on Saturday, February 6. A live stream of the service may be viewed starting at 11am by clicking here: https://zoom.us/j/99615030865 A public memorial visitation will be held Saturday February 6 from 12noon to 1pm at the Windham Chapel of Dolby Blais & Segee, 434 River Rd., Windham, ME 04062. Those who prefer to attend the visitation virtually may click here beginning at 12noon: https://zoom.us/j/91229191588?pwd=Q3ZQOHVQYXBJWWRjR1lBeEdMcm11Zz09 The passcode is: 702229 In lieu of flowers, memorial contribution’s in Merle’s name may be made to: The National Kidney Foundation, www.kidney.org or the Animal Refuge League of Greater Portland, https://arlgp.org/.

GORHAM&#8212;Merle Jay Mooney, 77, passed away peacefully, knowing that his family loved him very much, on January 27, 2021 at Maine Medical Center. He was born March 12, 1943, the son of the late Stanwood A. Mooney, Sr and Lorena H. Woods.... View Obituary & Service Information

The family of Merle Jay Mooney created this Life Tributes page to make it easy to share your memories.

Send flowers to the Mooney family.