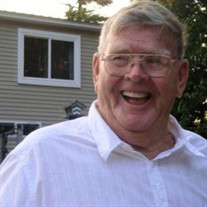 Merle N. Kelley, 88, Windham, husband of the late Dorothy Murphy Kelley died on November 20, 2021 at the Woods at Canco. Merle was born on November 23, 1932 in Bangor to George and Grace (True) Kelley. He attended schools in Bangor. He left school to begin working to help support his family. His first job driving a truck was in Fort Fairfield, ME hauling potatoes. The US Army called him to take a trip to Korea in 1950 and he took his first plane ride. Upon his return, he moved from his parents’ house in Brownville, down to Portland with his brother. He drove for Calderwood Bakery where he met his future wife Dotty. They married in 1957 and moved to a small winterized camp on Sebago Lake that he had purchased from his brother’s estate. They lived in this 3-bedroom camp with their seven children until they were able to build a much larger house on Sebago Lake in 1970 to accommodate their large family. Merle was one of the first to join the Local 370 Teamsters Union and was an active member throughout the years. He was a union man and never worked at a non-union company. Through the years he went to whichever job would best support his family and at one time worked three jobs. He worked at the following companies - Fox and Ginn, Hemingway, Quinn, St. Johnsonsbury, Highway Post Office, Old Colony, Blue Line, Sanborn's, retiring from APA. Merle was an avid fisherman and often planned vacations to Labrador and Newfoundland because he said there weren't any fish in Sebago Lake. When he retired, he fulfilled a lifetime dream of fishing in Alaska. He and Dotty spent three months driving their camper to Alaska and touring the state. The other pastime he enjoyed was music. He loved listening to old country music, bluegrass and of course truck driving songs. All his kids can quote song lyrics upon demand. He was used to having his travel companion Dotty, so it was a big deal when he decided to travel solo to a bluegrass concert in Kentucky; but he packed his camper and made his way south. Once he passed the Piscataquis Bridge, he called us to let us know he was taking a trip. He knew if he made it past the bridge without Dotty, he would be ok. His final trip was a bluegrass festival in Ohio where he met his daughter Sandra for a week of camping and music. Merle was predeceased by his wife, his parents, his brothers Guy Sprague and Otis Kelley, and his sister Hazel Sprague Heath. He is survived by his children; Stephen Kelley, of Raymond, Susan Kelley and Dan Brackett, of Westbrook, Sandra Kelley, and her fiancé, Terrence French, of Byron, IL, Timothy Kelley, and his wife, Cindy, of Westbrook, Kathleen Kelley-Cochrane, and her husband, Paul, of Raymond, Kevin Kelley, of Bangor, Alice Kelley and Gary Manzo, of Windham. His grandchildren; Brian Kelley, his fiancé, Jaclyn, and their five children of NH, Hannah Kelley, of Gray, Benjamin Soboleski, of Gray, Molly and Abigail Cochrane, of Raymond. Visiting hours will be held on Sunday, November 28 at Dolby, Blais & Segee Funeral Home, 434 River Rd., Windham from 11:00am to 1:00pm, with a service starting at 1:00pm. Burial will follow at Mayberry Cemetery in Windham.

Merle N. Kelley, 88, Windham, husband of the late Dorothy Murphy Kelley died on November 20, 2021 at the Woods at Canco. Merle was born on November 23, 1932 in Bangor to George and Grace (True) Kelley. He attended schools in Bangor. He left... View Obituary & Service Information

The family of Merle N. Kelley created this Life Tributes page to make it easy to share your memories.

Send flowers to the Kelley family.