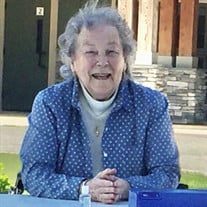 WESTBROOK - Maxine Louise Denbow Stenger, 89, died on January 3, 2021 with family members holding her hand. A recent cancer diagnosis caused her to spend her final days at Gosnell House Hospice surrounded by many of those she loved, a pleasure that had eluded her during the long months of pandemic. Maxine was born in Portland. She grew up in Rockland under the loving care and guidance of Emily Murray, the only mother Maxine ever knew. Soon after graduating from Rockland High School, Maxine met Tom Stenger of Friendship. She carried many happy memories of time spent with his parents who ran The Lobster Pot in Friendship during their courtship. Maxine and Tom were married on August 16, 1952. With Tom in the Navy, their married life began with various assignments along the East Coast before settling back in the Rockland neighborhood she grew up in. In 1967, Tom’s career took them to Gorham and into the home they lived in for 51 years. In 2018, they moved to Stroudwater Lodge in Westbrook. Maxine was first and foremost a mother and a homemaker. She loved their home on Sebago Lake Road and proudly raised their three children there. Maxine and Tom were thrilled beyond words when grandson, Matthew Thomas, was born. Having the opportunity to see Matt grow into a kind and successful young man filled them with pride. Maxine was heartbroken when pandemic related lockdowns meant she and Tom were not able to attend or join in celebrations of Matt’s Cum Laude graduation from the University of Maine last May. Maxine had a gift for making lifelong friends wherever she went. She was always the first person to arrive at a new neighbor’s door to welcome them, usually carrying a plate of fresh baked goodies. Always ready to lend a helping hand or a hug, Maxine spent countless hours and found great joy in volunteering for a wide variety of organizations including the Baxter Memorial Library, Great Falls Elementary and The Ronald McDonald House where she was so pleased to have been one of the original volunteers selected to help open the House. She was a devoted member of Saint Anne’s Parish in Gorham. She devoted herself to any and all assistance needed at the church ranging from teaching CCD classes to perhaps her most famous roles delighting children through the years as the best ever Mrs. Santa Claus. Maxine would be quick to tell you that she found her favorite job when, after her own children were grown, Sandy and Paul Penna hired her to be a Nanny for their newborn daughter. She liked it so much she kept the position for 19 years. Later in life, she would also share that the joy she found in watching Katie and her younger brother Nick grow up was something she would have ultimately have done for free. Maxine is survived by her husband of 68 years, Thomas E Stenger; children, Jill (Peter) King, Thomas Jr (Jayne) Stenger, Amy (Bob) Doyle; grandson Matthew Thomas Stenger and her brother, Robert Denbow. She is also survived by her beloved companion of many years, Buddy the cat and would certainly be glad to know that he is now dedicating all his time to looking after Tom. In these extraordinary times, the family would like to thank the wonderful staff at Stroudwater Lodge and Gosnell House for the dedicated and loving care they provided to Maxine even as she did her best to convince them (and all of us) that she was just fine and that someone else must certainly need more help than she did. At Maxine’s request there will be no memorial services. If you would like to honor Maxine’s memory in some way, please consider making a donation to: Baxter Memorial Library, 71 South Street, Gorham, ME 04038 Or Ronald McDonald House of Portland, 250 Brackett Street, Portland, ME 04102.

WESTBROOK - Maxine Louise Denbow Stenger, 89, died on January 3, 2021 with family members holding her hand. A recent cancer diagnosis caused her to spend her final days at Gosnell House Hospice surrounded by many of those she loved, a pleasure... View Obituary & Service Information

The family of Maxine L. (Denbow) Stenger created this Life Tributes page to make it easy to share your memories.

Send flowers to the Stenger family.