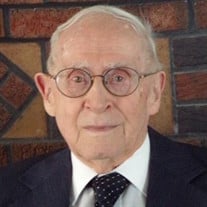 Maurice Mason Whitten died January 6, 2021 at Gorham House in Gorham, Maine. He was born October 1, 1923, in Providence, R.I., the son of the late Rev. Albert E. and Caroline A. (Steere) Whitten. He grew up in several Maine towns where his father was appointed to Methodist Churches. He graduated from Coburn Classical Institute in Waterville in 1941. He received his Bachelor's Degree in Chemistry from Colby College in 1945. He received his Master's Degree from Teacher's College, Columbia University in 1949. His diploma was signed by Dwight D. Eisenhower who was President of Columbia University at that time. He got his Ph.D. from Ohio State University in 1971. Whitten also did graduate work at Union College (Schenectady), University of Minnesota (Minneapolis), Philadelphia College of Pharmacy and Science, Hampshire College and the University of Maine. Whitten taught sciences at Wilton Academy (1945-48) and Lewiston High School (1948-55). He also taught chemistry one year at Central Maine General Hospital School of Nursing in 1952. In 1955, Whitten joined the faculty of Gorham State Teachers College (now University of Southern Maine) to teach chemistry and physical science. He was on leave to the Maine State Department of Education to be the Master Science Teacher on an educational television program to be participated in by many high schools throughout the state. It was also seen by many people in their homes. He also taught in three summer sessions at University of Maine in Orono. Whitten retired in 1983 as Professor Emeritus of Chemistry. He prepared a course, "The Civil War, A Prelude to Future Wars," which he taught in USM's Osher Lifelong Learning Institute for four semesters. Whitten was a member of: The American Association for the Advancement of Science , American Chemical Society, History of Science Society, Union of Concerned Scientists, National Science Teachers Association, New England Association of Chemistry Teachers, Nature Conservancy, National Resources Council of Maine, Presumpscot Regional Land Trust, Maine Historical Society, Gorham Historical Society (President 1984-86), Maine Charitable Mechanics Association, Roger Williams Family Association, Cressey Road United Methodist Church, (Gorham),and Groveville Congregational Church, (Buxton). Whitten did extensive research on the Gunpowder Mills of Maine starting in 1965. He wrote the booklet “The Gunpowder Mills of Gorham, Maine” in 1986. In 1990, his book,The Gunpowder Mills of Maine was published and since reprinted. In 2012, he wrote the booklet “The Gunpowder Mills of Gorham-Windham, Maine”. In 1983, Whitten married Doris R. Mann of Gorham. The Whittens travelled extensively in all 50 states and all of the Canadian Provinces. In 1985, they flew to New Zealand and Australia to visit Maurice's relatives. His father came to the United States from Australia. They flew home by way of Europe thus going around the world. In 1990, they attended the “Passion Play” in Oberammergau, Germany, and toured in several countries at that time and in later trips. For many years, the Whittens spent 3 or 4 winter months in St. Petersburg, FL. Survivors include seven step-children: Judith A. Caouette, Old Orchard Beach, ME, Alan A. Mann, Pittsboro, NC. Margery J. Hulsey, Westbrook, ME, Beverly E. Lessard, Lyman, ME, Dr. Ronald W. Mann, Neenah, WI, Stephen A. Mann, Bridgewater, NH, Mary E. Delany, Cary, NC, also, 18 step-grandchildren, 26 step-great-grandchildren and several cousins in Australia and Canada. He was predeceased by his wife Doris Whitten in 2019. In lieu of flowers, donations in Maurice's name may be given to the University of Southern Maine for scholarships. A graveside service will be held on Wednesday, May 26th at 1pm at the Highland Cemetery in Limerick. Arrangements are in the care of the Gorham Chapel of Dolby Blais & Segee, 76 State St., Gorham, ME 04038.

Maurice Mason Whitten died January 6, 2021 at Gorham House in Gorham, Maine. He was born October 1, 1923, in Providence, R.I., the son of the late Rev. Albert E. and Caroline A. (Steere) Whitten. He grew up in several... View Obituary & Service Information

The family of Maurice M. Whitten created this Life Tributes page to make it easy to share your memories.

Send flowers to the Whitten family.