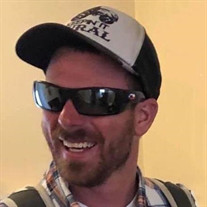 Mathew Scott Ansin, 26 years old, passed away on Wednesday, April 7, 2021, as the result of a motorcycle accident in Indiana. He was born on August 25, 1994, in Somerville, Massachusetts. Mathew graduated from Windham High School, in 2013, in Windham, Maine. At 18 years of age, he became employed by Kiewit Construction. He was quickly climbing the company ladder, and was a Traveling Union Laborer Foreman. In his work with Kiewit, he traveled all across the United States, building power plants and windmills. He took great pride in his work. Mathew put his entire heart and soul into everything he did. He seized every moment, and lived life to its absolute fullest. He believed that everyone was worthy of his time, love and friendship; He gave without ever expecting anything in return. His core value was “pay it forward”- give for the pure joy it brings to others, and make sure everyone has a fair chance. Mathew wanted to make sure everyone had a “hot suppa” (a stomach full of warm, comforting food). He loved tractors, snow mobiling, four wheeling, cars, motorcycles, music, animals, and, most of all, his friends and family. He would do anything to help someone, even if it meant putting his own life in jeopardy. Mathew is survived by his parents, Mark and Deborah (Stanley) Ansin; brother, Joshua Ansin; sister, Aleia Ansin, as well as many Aunts, Uncles, cousins, and friends. He was preceded in death by his maternal Grandparents, Paul and Gilda (Drinkwater) Stanley; and paternal Grandparents, Stanley and Rhona Ansin. Please keep the prayers coming. His family will need them now and forever. Visiting hours will be held from 5p.m.-7p.m., Friday, April 16, 2021, at The Westbrook Chapel of Dolby, Blais & Segee, 35 Church Street, Westbrook, Maine. In lieu of flowers, memorial donations may be made to the American Society for the Prevention of Cruelty to Animals (ASPCA), at: https://secure.aspca.org/donate/2021-eap-mem2-web-T1-P2?ms=wb_hom_position1-mem2-20210406&initialms=wb_hom_position1-mem2-20210406&pcode=WEB2HOM&lpcode=WEB1HOM.

Mathew Scott Ansin, 26 years old, passed away on Wednesday, April 7, 2021, as the result of a motorcycle accident in Indiana. He was born on August 25, 1994, in Somerville, Massachusetts. Mathew graduated from Windham High School, in 2013,... View Obituary & Service Information

The family of Mathew S. Ansin created this Life Tributes page to make it easy to share your memories.

Send flowers to the Ansin family.