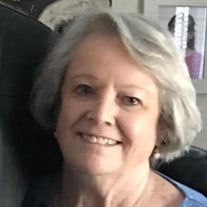 Maryann R Usher, 76, of Westbrook passed away on July 20, 2020 after a long and courageous battle with cancer. She was born on October 16, 1943 in Lewiston to James A and Katherine T. Frank. She attended school in South Portland, Maine where she graduated from Cathedral High School in 1962. On August 20, 1966 Maryann married Robert E. Usher and in July of 1967 they bought their first home in Westbrook, where they have lived to this day and raised their family. Maryann was an active member of St. Hyacinth Church in Westbrook. She was a member of Sisters of Isabella; Sodality of St. Anne and a member of Westbrook Woman’s Club. She enjoyed knitting and crocheting and has made numerous sweaters, hats, mittens, and many more which she has given out to friends and family. She also enjoyed sewing and quilting. One of her favorite things to sew for her grandchildren were holiday pillowcases, which they all loved. Maryann donated several of the holiday pillowcases to the Barbara Bush Hospital so the children there would have their own. Maryann enjoyed playing Mahjong with her group of ladies, and had fond memories of all their times together. She volunteered in several capacities, assisting with voting, sorting coats for Coats for Kids, cooking and serving food during various church functions. Maryann and Bob spent many years camping with family and friends all over the State of Maine. Another passion of theirs was golfing. She was a member of Rivermeadow Golf Club and Sunset Ridge. When they were not camping or golfing, you could find them relaxing at their home outback on the patio and in the pool. Maryann attended Maine State Academy for Hairdressing and worked as a hairdresser for over 40 years where she operated a Beauty Shop in the basement of their home. Maryann is survived by her husband, Robert E. Usher, of 53 years. Daughter; Christine, and her husband Anthony Ganem, of Gray and their children Nicole and Derek. Son; David, and his wife Kathy, of Gray and their children Cameron and Alexis. Daughter; Karen, and her husband Benjamin Goodwin, of Saco and their daughter Chloe. She is also survived by a large extended family of brother in laws and sister in laws, nieces, and nephews. She is predeceased by her parents; sister, Katherine Miller; brothers, James A Frank Jr., Robert Frank, and George Frank; grandson, Evan Robert Goodwin, and her niece, Kelly Bushey. The family would like to express their sincere gratitude to the Northern Lights Health Organization and the staff at Mercy Hospital for their care and compassion given to Maryann and the rest of her family during this difficult time. A visitation will be held on Friday, July 24, 2020 from 10:00am to 12:00pm with a service starting at 12:00pm at the Westbrook Chapel of Dolby Blais Segee, 35 Church St., Westbrook, ME. Masks are required.

Maryann R Usher, 76, of Westbrook passed away on July 20, 2020 after a long and courageous battle with cancer. She was born on October 16, 1943 in Lewiston to James A and Katherine T. Frank. She attended school in South Portland, Maine where... View Obituary & Service Information

The family of Maryann R Usher created this Life Tributes page to make it easy to share your memories.

Send flowers to the Usher family.