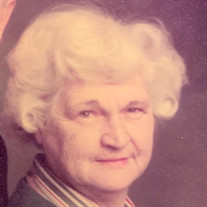 Standish Mary Alice Fitzpatrick Cameron, 97: passed away on June 26, at Gorham House after a lengthy decline in health and dementia. She was born May 6, 1924 in Chelsea, Massachusetts daughter of Robert and Anne Fitzpatrick. She worked a short time as a dental assistant then during WWll she was a welder at Chelsea/Boston Naval Shipyard. While working there she met the love of her life Kenneth who was a Navy Seabee Sailor. They eloped to Pennsylvania where they married and then Ken shipped out. Mary moved to Portland, Maine and waited for Ken to return. They had 2 children Kenneth and Joann. Mary was a stay at home mom who enjoyed walking, P T A activities, knitting, and sewing. Christmas time she worked at Porteous Mitchell and Braun teaching knitting and selling yarn. After Kenneth’s retirement they moved to Standish. In addition to her parents Mary was predeceased by her husband of 61 years Kenneth; brothers, Robert, Joe, and Hugh Fitzpatrick; and sisters, Betty Killion and Catherine Deyschtner. She is survived by, a brother Richard Fitzpatrick and a sister Patricia Dillon, son Kenneth & wife Pam Cameron , daughter Joann and husband Larry Levesque. grandchildren Heather Cameron , Doug Cameron & wife Wendy , Kenneth Cameron and wife Denise, Brian Levesque, Jennifer Levesque, Kerry Mckenney and husband Ben as well as Many great-grandchildren and friend and former daughter in-law Audrey Cameron. A big thank you to the family members, PT, OT, visiting nurses, and helpers who helped keep her in her own home for 14 years. All the staff in rehab, and then Windsor 2 at the Gorham House for taking care of her at the end. A funeral service will be held at 1:00PM Tuesday June 29, at the Windham Chapel of Dolby, Blais & Segee, 434 River Road, Windham, where an hour of visitation will be held before the service from 12:00 – 1:00PM. Interment will follow at Brooklawn Memorial Park, 2002 Congress Street, Portland. To express condolences or to participate in Mary’s online tribute please visit www.DolbyBlaisSegee.com

Standish Mary Alice Fitzpatrick Cameron, 97: passed away on June 26, at Gorham House after a lengthy decline in health and dementia. She was born May 6, 1924 in Chelsea, Massachusetts daughter of Robert and Anne Fitzpatrick. She worked a... View Obituary & Service Information

The family of Mary Alice Fitzpatrick Cameron created this Life Tributes page to make it easy to share your memories.

Send flowers to the Cameron family.