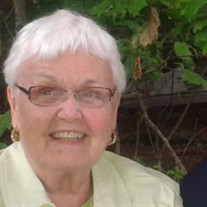 WESTBROOK, -Mary Louise Barton, 90, passed away after a long illness (of natural cause), with grace, at her home in Westbrook, on November 24th, with family and her care giver by her side. She was born on August 1, 1931 in Westbrook. She was the daughter of Leverett and Louise (Watson) Reece, and sister to pre diseased Robert Reece. Mary’s mother passed away when she was very young and she was raised by her father and maternal grandfather, George W. Watson. Mary was a graduate of Westbrook High School, the class of 1950. She was co-owner of Reece’s Variety and Barton’s Flowers. She loved her class reunions and particularly loved planning them. Mary was an active member of the Past Rainbow Advisors, Eastern Star, Westbrook Women’s Club, and the Westbrook Warren Congregational Church for fifty years. She was an avid bridge player in several groups, a member of the Women’s Literary Club, former board member of Seventy-Five State Street, and a member of the Woodford’s Club. Mary her husband loved to travel to FTD floral conventions and enjoyed going on cruises with family and friends. She loved being at Sebago Lake at their camp on Harmons Beach. She welcomed everyone to come and enjoy it as much as she did, from June through October for over 50 years, including this year. She married her surviving husband, Enoch William Barton on July 11th 1953. They were happily married for 68 years. She was the loving mother of Winston, Stephen, and Shirley and their wife and partners: Carmela, Liz, and Bob respectively. Mary was a beloved grandmother to her eight grandchildren: Vanessa, Maria, Jason, Isabelle, Dana, Stephen, Ryan, Spencer, and their spouses and partners. She was proud to have lived to be a great-grandmother of six and one on the way. Her family would like to thank the Individual Care of Maine for their wonderful care of Mary during the last year and a half. Visiting hours will be from 5:00 to 8:00 PM Monday, November 29th at the Westbrook Chapel of Dolby Blais & Segee at 35 Church St. in Westbrook. Services will be on Tuesday, November 30th at 10:00 AM at the Westbrook Warren Congregational Church on Main St. Burial will follow at Woodlawn Cemetery in Westbrook.

WESTBROOK, -Mary Louise Barton, 90, passed away after a long illness (of natural cause), with grace, at her home in Westbrook, on November 24th, with family and her care giver by her side. She was born on August 1, 1931 in Westbrook. She was... View Obituary & Service Information

The family of Mary Louise Barton created this Life Tributes page to make it easy to share your memories.

WESTBROOK, -Mary Louise Barton, 90, passed away after a long...

Send flowers to the Barton family.