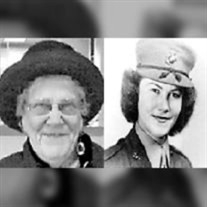 PORTLAND - It is with heavy heart that we announce that our mother Marjorie H. Dyer, 97, has passed after a long and fruitful life. She was born on November 10, 1923 in Westbrook to Luther C. and Harriett L (Maxwell) Edwards. She was raised in Westbrook and graduated form Westbrook High School class of 1942. After graduation she went to work for Campbell, Payson, and Noyes Insurance and then the Offices of the South Portland Shipyard. She married Russell L. Dyer of Gorham on November 28, 1942. Russell joined the Army Air Corps and later she joined the U.S. Marine Corps in 1944, an affiliation of which she was immensely proud. She was stationed in Washington, D.C. for the duration of the war. After being discharged they returned to Maine to start a family. Marjorie was a homemaker and as such she became the neighborhood mom to all her children’s friends. Her cookie jar was always full, and someone’s hands were always stuck in it. She was a Girl Scout Leader to her daughter’s troop and loved it all. She became a life member of Eastern Star #59 and a life member of the Woodfords Club. After her husband retired, they took their camper on several months long trips to fish in Alaska and enjoyed the leisurely tour in both directions. Their touring was crowned by their photo safari to Kenya, Africa. They also enjoyed their camp on Chesuncook Lake with many friends, fishing and snowmobiling. Marjorie was predeceased by her husband, as well as son-in-law, Robert O. Gerry; in-laws, Philip and Alice (Dyer) Labrecque, Kenneth Dyer, Harold and Jane Dyer, Robert Dyer, and Norman Dyer. She is survived by her three children, Vaughn Dyer and his wife, Diane, Gayle L. Patry and her husband, Paul, and Dawn Gerry of Florida. She also leaves three grandchildren, Christopher J Gerry, Russell E. Dyer and his wife, Denise, and Stephen Dyer and his wife, Tegan. She also leaves two great-grandchildren, Aiden R. and Elijah Q. Dyer. Her family owes a huge debt of gratitude to her wonderful neighbors who always looked over her, Joe, Dawn, Rick, Carol, Merilee, and Zhenya. Their vigil was what contributed greatly to herbeing able to live at home independently. Also, a special thanks to the Gosnell House for their caring efforts. Relatives and friends are invited to visiting hours, 6 to 8 P.M., Tuesday, March 30, 2021 at the Westbrook Chapel of Dolby, Blais & Segee. In lieu of flowers please donate to Animal Refuge League of Greater Portland, 217 Landing Road, Westbrook, ME 04092. To express condolences and to participate in Marjorie’s online tribute, please visit www.DolbyBlaisSegee.com

PORTLAND - It is with heavy heart that we announce that our mother Marjorie H. Dyer, 97, has passed after a long and fruitful life. She was born on November 10, 1923 in Westbrook to Luther C. and Harriett L (Maxwell) Edwards. She was raised... View Obituary & Service Information

The family of Marjorie Harriett Dyer created this Life Tributes page to make it easy to share your memories.

PORTLAND - It is with heavy heart that we announce that our mother...

Send flowers to the Dyer family.