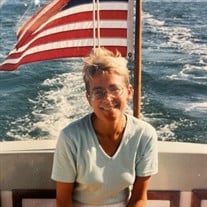 Marion Ferguson Lord Steadman, “Polly,” died on December 9 at Chase Point Assisted Living in Damariscotta, Maine, after winning many victories in an epic battle with lung cancer. She was preparing to celebrate her 80th Christmas, a holiday made wonderful for her family and friends over the years with her lavish and thoughtful presents, wrapped with beautiful ribbons and bows and colorful flourishes—all flaunting her love of living and giving. Polly was a well-known artist in midcoast Maine and exhibited at Saltwater Artists Gallery at Pemaquid Point from 2019 to 2021. Before that, her paintings were exhibited or displayed at many coastal Maine locations including the Chocolate Church Arts Center in Bath, the Brick House Gallery in Boothbay Harbor, the Maine Art Gallery in Wiscasset, the Sea Studio Gallery in Tenants Harbor, and the Boothbay Region Art Foundation. She won People’s Choice Awards for two years at the Central Lincoln County YMCA Art Show and Sale. For over 10 years, she promoted exhibits of other artists’ works at Savory Maine restaurant in downtown Damariscotta. Polly was born on July 27, 1942, one of three daughters of William S. and Marion M. (Manns) Lord. She grew up in rural Gilford, N.H. where, as a toddler during World War II, she helped her older sister Caroline collect milkweed pods for the fiber needed to fill life jackets for service men and women. She loved to paint and draw even as a child and made name cards every year for family members at the Thanksgiving table. During high school days, she was bussed to the closest high school, 5 miles away in Laconia. Her friends remember a friendly community where, if they missed the school bus because of after school activities, they would sit on a stone wall near the school and wait until people commuting home to Gilford picked them up. At Laconia High School, Polly was voted Queen of the Prom and graduated in 1960. She attended Skidmore College and worked one summer in the office of N.H. Representative Perkins Bass in Washington, D.C. She graduated from​ Skidmore with a B.A. in Psychology in 1964 and then worked in Boston for Edward Brooke when he was Attorney General of Massachusetts. She was married first to Stephen W. Winship and then for 20 years to Frederick W. Steadman, Jr., until his death in 1992. They lived in New Harbor and then in Edgecomb in a house they built on the banks of the Sheepscot River. After Fred suffered a traumatic accident, Polly visited him every day at Maine Medical Center and later for months in rehab in Portland while he recovered. During that time she nailed most of the shingles onto the roof of the new home by herself. She grew flowers and vegetables and became an expert organic gardener. Inspired by the beauty of her home’s setting near the ocean, she realized she wanted to change from painting as a hobby to painting more regularly and joined “The Brushstrokes,” a group of artists who met every Monday to paint and develop their skills. In the process of painting each week, she began to feel that her realistic depictions of landscapes and seascapes weren’t expressing her real identity as an artist. She took the leap and started to paint abstractly. She had always worked in oils but now found new excitement and freedom in blending oils in a personal technique which, as she said, changed the process of painting “from a challenge to a passion.” She rented a studio in Waldoboro and joyfully painted hundreds of canvases. In 1999, she sold the home in Edgecomb and moved to Damariscotta where she began new friendships and new activities in addition to her art. Her work with art shows at Savory Maine restaurant was a touchstone of meaning and purpose. She volunteered at Coastal Maine Botanical Gardens and played pickleball. She sang in local singing groups including Hearts Ever Young (H.E.Y.), Midcoast Community Chorus, and Homeward Bound Hospice Choir. Polly loved cats and always had at least one in her household, and she also volunteered at local animal shelters and at Apifera Farm in Bremen, where she joyfully engaged with Harry the llama and his friends and assisted in taking them for animal visits to Cove’s Edge, a nursing home in Damariscotta. She developed a special love for Monarch ​butterflies and nurtured them on milkweed plants in her yard as tenderly as she had picked milkweed pods for the war effort as a child. When Polly was admitted to Chase Point in April of this year and asked to describe her early years, she said, “I felt safe and loved.” This is how Polly made everyone feel. She liked people in spite of and because of their differences, and friendships bloomed around her. She encouraged everyone to remember the rainbow at the end of the rain, and she could find four-leaf clovers where no one else could. Polly was a secure person who had strong opinions, and they were always original, loving, and forgiving. And her beautiful smile could light up a room. She was predeceased by her beloved husband Fred, her parents, and her sisters Caroline Lord Gross of Concord, N.H., and Jane Lord Humphries of Yucca Valley, California. She is survived by loving cousins and many loving friends. Special thanks are given to the staff of Chase Point Assisted Living for their wonderful care, to Cindy Hagar’s group of personal care attendants, to MaineHealth Care at Home Hospice and Coastal Family Hospice, and to Timothy Goltz M.D. and Brian Haney D.O. Burial will be private at Cedar Brook Burial Ground (a green cemetery, according to Polly’s wishes) near Polly’s ancestral home in Limington. In place of flowers, donations in Polly’s memory can be made to Apifera Farm Inc., 315 Waldoboro Road, Bremen, ME 04551 or in her name to the charity of one’s choice.

Marion Ferguson Lord Steadman, &#8220;Polly,&#8221; died on December 9 at Chase Point Assisted Living in Damariscotta, Maine, after winning many victories in an epic battle with lung cancer. She was preparing to celebrate her 80th Christmas,... View Obituary & Service Information

The family of Marion "Polly" Lord Steadman created this Life Tributes page to make it easy to share your memories.