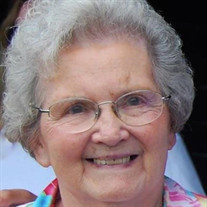 Westbrook– Marion K. Douglas, 88, a woman of uncommon grace and charity, passed away peacefully at her home on December 15, 2020, with her family at her side. Marion was born in Farmington, Maine on March 19, 1932 and was the adopted daughter of Ardine and Lillian Kinney. She grew up in Phillips, attended local schools, and married her Phillips High School sweetheart, Robert Douglas, at the age of 16.Robert and Marion moved to Westbook in 1951 and in 1956 bought their first and only house at 13 Chesley Street, where they resided for 63 years until Robert’s passing last year. Together they raised five children in a home that became a destination for holiday gatherings and legendary buffets. Marion worked at the First National store on Main Street in Westbrook and later in the cafeteria of the B&M Baked Beans plant in Portland. She was also a deli clerk at Martin’s Food Supermarket and moved up to deli manager at the Falmouth Hannaford. In 1992, she got her CNA license and worked for the Westbrook Housing Authority before leaving to do private care. Marion was an active member of the Westbrook United Methodist Church and the Methodist Women’s group, spearheading numerous church suppers. She took a cake decorating class at the high school and started a small catering business specializing in wedding receptions in the church vestry. Marion loved her Avon lady, who she swore was responsible for her wrinkle-free skin; her long-time hairdresser, Pam Cole, who fussed over her and made her look fabulous; and watching the entire schedule of the Maine high school basketball tournament on TV every February. She was, above all else, a natural-born caregiver. Her father-in-law, James Douglas, would often say, “Your mother, she’s very good with old people and babies.” Counting her own parents and Robert’s, other family members who needed care or a brief landing space, and young souls in search of stability, the number of people she opened up her home to would fill most branches of the Douglas and Kinney family trees. Marion embraced her role as Grammie and Great Grammie with unapologetic spoiling of her grandkids and great-grandkids. Her generosity knew no bounds and she took great delight in orchestrating the magic of Christmas for little ones giddy with anticipation of a seemingly never-ending parade of presents. Her home was a haven, often a refuge, for the younger generations and her lap was the most sought-after spot in the house. She served Froot Loops to cure cranky dispositions and calmed restless toddlers with her signature rendition of “Bye Low, Bye Low.” Marion was renowned for serving food and comfort, often together and always in abundance. She was at her best when planning family gatherings and holidays, and single-handedly prepared a large Thanksgiving dinner for well over 60 years, including those when it was served on a plywood ping-pong table down cellar. Her Christmas buffets, with party potatoes, seafood casseroles, and cheesy vegetable medleys, were the highlight of the day and second helpings were expected and irresistible. Her desserts were the stuff of legend. Often requiring two or three separate tables to display, her apple crisp, custard pie, molasses cookies, eclair pie, and, of course, her world-famous whoopie pies would always command attention, and after being gobbled up, would be talked about later in tones of reverence. At one point Marion wrote down her go-to recipes and passed them down to her grandchildren, an inheritance as prized as any stock portfolio. Marion infused her family with a nurturing and forgiving spirit. She did not need to preach, cajole, or harangue; by her example alone did she graciously impart life’s important lessons as easily as serving up her fish chowder. She was the one who always had the kind word, the lovely smile, the listening ear, the reassuring hug, when you needed it most. And she made great whoopie pies. Marion was predeceased by her husband of 70 years, Robert C. Douglas; her parents; her daughter Kathleen Raye Douglas, who died in infancy; and her brother, Leonard Kinney, and sister-in-law Elaine Kinney. She is survived by her sister, Priscilla Goding; her children, Robert A. Douglas and his wife Barbara of Gorham, Donnelly S. Douglas and his wife Abby of Freeport, Stephen J. Douglas and his wife Louise of Windham, Tamara D. Stolfi and her husband Robert of Windham, and Matthew S. Douglas of Wells; eleven grandchildren and seven great-grandchildren, and four beloved nieces and nephews. The family wishes to thank Laurie Fougere, R.N. and the home health aides at Northern Light Home Care and Hospice for their dedicated medical attention, and a sterling team of caregivers– Gail, Tracy, Frankie, Patti, Susie, Tiffany, and Bernadette– whose loving care and compassion allowed Marion to live comfortably at home during the past three years. No visitation or celebration of life service is planned at this time. Memorial donations in Marion’s memory may be made to: Robert Douglas Building Fund c/o Phillips Historical Society, P.O. Box 216 Phillips, ME 04966 or Animal Refuge League of Greater Portland, P.O. Box 336 Westbrook, ME 04098. To express condolences and to participate in Marion’s online tribute, please visit www.DolbyBlaisSegee.com

Westbrook&#8211; Marion K. Douglas, 88, a woman of uncommon grace and charity, passed away peacefully at her home on December 15, 2020, with her family at her side. Marion was born in Farmington, Maine on March 19, 1932 and was the adopted daughter... View Obituary & Service Information

The family of Marion K. Douglas created this Life Tributes page to make it easy to share your memories.

Westbrook– Marion K. Douglas, 88, a woman of uncommon grace and...

Send flowers to the Douglas family.