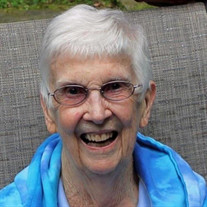 WINDHAM - Marilyn Florence (Powers) Ohlsen died peacefully at home on April 8, 2022. She was born on May 24, 1926, in Waltham, Massachusetts, the daughter of Stanley and Grace (Burke) Powers. Marilyn graduated from Waltham High School’s class of 1944. After graduation she attended Framingham Teachers College. She married her high school sweetheart, Robert Andrew Ohlsen, on June 7, 1947, and they settled in Waltham. During WWII she volunteered in the Air Corps and Red Cross. She also volunteered in the Red Cross during the Vietnam war. Marilyn enjoyed numerous hobbies. She was an avid knitter, seamstress, quilter and a fabulous cook. Her fruit and vegetable gardens were one of her favorite hobbies. She loved to can and freeze her produce every fall. Marilyn was a member of the Order of the Eastern Star. Her Christian faith was the cornerstone of her life. Her church activities included singing in the choir, playing in the Bell Choir and participating in Women’s Fellowship (of course cooking in the kitchen was her favorite). In addition to her parents, and her husband, “Bob”, she was predeceased by her sister, Nancy (Powers) Ballou. She is survived by her daughters, Deborah Ann Brown of Windham, Maine, and Denise Koster and her husband, Ronald, of Windham, Maine; sons, Jeffrey Robert Ohlsen and his wife, Debora, of East Baldwin and Jonathan Nils Ohlsen, of North Myrtle Beach, South Carolina; 10 grandchildren, Troy Edward Brown and his wife, Jill, Tava Ann (Ohlsen) Cotter, Autumn Kristen Ohlsen, Anders Jeffrey “AJ” Ohlsen, Scott Matthew Ohlsen and his wife, Serenity, Peter Edward DeOliveira and his wife, Marissa, Kristen Leigh (Ohlsen) Hood and her husband, Timothy, Megan Alyssa (Ohlsen) Pierre and her husband, Bart, Sara Elizabeth Koster, Brian Christian Koster and his wife, Sally; 16 great-grandchildren; one loving brother, Peter Powers of Manchester, NH; and many nieces and nephews. The family would like to thank Hospice of Southern Maine for their kind and compassionate care. We are especially grateful for the love and care that Stephanie and Leslie provided for our mother. A Memorial Service will be celebrated, 1 p.m., Saturday, April 30, 2022 at the Windham Hill United Church of Christ, 140 Windham Center Road, Windham, ME 04062. In lieu of flowers please send donations to Hospice of Southern Maine, 390 US Route 1, Scarborough, ME 04074-9928 or to Windham Hill UCC Kitchen Fund, 140 Windham Center Road, Windham, ME 04062.

The family of Marilyn Florence (Powers) Ohlsen created this Life Tributes page to make it easy to share your memories.