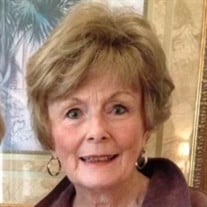 Maddie Lou (Norton) Chaplin, 80, of Gorham, ME, passed away peacefully on Friday, March 25th, 2022, with her loving family by her side. She was born on August 1st, 1941, in Bath, ME, as the first daughter of the later Elmer and Lucille Norton. Maddie Lou graduated from Gorham High School as a member of the class of 1959. She married and had four children, whom she raised in Gorham. All four children graduated from Gorham High school. She worked at Windham Junior High for several years, all the while honing her artistic talents. Maddie Lou taught painting classes for years at many different locations, including Gorham Adult Education. She enjoyed teaching painting workshops in Boothbay and Pemaquid, ME. She continued her journey as an artist by attending many workshops, hosted by many well-known, accomplished artists. Her family and friends deeply cherish her artistic pieces, many of which are on display in their homes today. Maddie Lou enjoyed early years with her children at her family’s camp in Small Point, ME, where the days were filled with lobster bakes and family fun. She was an active community member, often participating in the craft and garden clubs. In later years, she joined the Gorham High School Alumni Association to establish deeper roots within the community. Maddie Lou was surrounded by many dear friends, who she cherished and spent immense amounts of time with. She made many memories travelling around the state of Maine with those closest to her. Painting was always the motive but being with friends was the purpose. Maddie Lou enjoyed keeping up with every one of her grandchildren and great grandchildren, especially as the family grew. She was very proud of their accomplishments. She is survived by her brother Clinton Norton (Andrea) of Lynn, MA, sister Pamela (Robert) Bredin of Fort Mill, SC, cousin Susan (Henry) Sommers of Gorham, ME, son Jeffrey (Tammy) Shiers of Bath, ME and their children Matthew, Josh and Megan, son Darren (Lisa) Shiers of Gorham, ME and their children Jordan, Cole, Delaney, and Hallie, daughter Darcy (Todd) Hammond of Windham, ME and their children Derek and Ethan, daughter Deanna (Anthony) DiNovi of Wellesley, MA and their children Julia and John, seven great grandchildren and many beloved nieces and nephews. A Service and Celebration of Life will be held at the First Parish Congregational Church, 1 Church Street, Gorham, ME Saturday, April 2nd 10:00 AM with a reception to follow.

Maddie Lou (Norton) Chaplin, 80, of Gorham, ME, passed away peacefully on Friday, March 25th, 2022, with her loving family by her side. She was born on August 1st, 1941, in Bath, ME, as the first daughter of the later Elmer and Lucille Norton.... View Obituary & Service Information

The family of Maddie Lou Chaplin created this Life Tributes page to make it easy to share your memories.

Maddie Lou (Norton) Chaplin, 80, of Gorham, ME, passed away peacefully...

Send flowers to the Chaplin family.