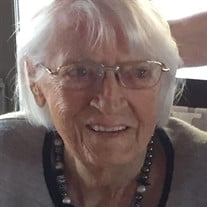 WESTBROOK - Mabel Mae Landry, 96, died peacefully August 23, 2021 at her home at Stroudwater Lodge. Born January 21, 1925, to Andrew and Mary Johndro in Limestone on the family potato farm, the youngest of 14 children. Her mother died when she was 8 and she was mostly raised by her beloved older sister, Madeline (Neen). She moved to Portland at age 18 and lived with her sister Beatrice (Bea) and worked various factory jobs. After WWII she met Leo Landry and married in 1949. A marriage of 68 years before his passing in 2017. They raised three sons, Gary, James, and Steven. A beloved mother, admired for her hard work at home and as a long-time employee of the telephone company, retiring in 1990. Mabel enjoyed activities such as knitting, word-find puzzles, and bingo, and she bowled regularly into her 90’s. She was especially proud to have been a longtime regular blood donor at the American Red Cross right up until this last year. Mabel is survived by three loving sons and their wives Gary and wife, Chari Chalmers of Westbrook, James and wife, Kari of Spokane, WA, and Steven and wife, Gail of Portland. She also leaves behind two granddaughters, Charrisa and husband, Sean Warnock of Nolanville, TX, and Kelly and husband, Jason Tornichio; and three great grandsons, Lucian, Tristian, and Ezra of Henrico, VA. The family wishes to thank the staff of Stroudwater Lodge for their care and assistance over thelast 3 years, and also the staff of Hospice of Southern Maine for their care in her final days. A graveside service will be held, 11 a.m., Saturday, August 28, 2021 at Brooklawn Memorial Park, Portland. Following the service, the family will gather at 356 Brook Street, Westbrook. In lieu of flowers, memorial donations may be made to the American Red Cross, P.O. Box 37839, Boone, IA 50037-0839 or St. Jude Children’s Hospital, 501 St. Jude Place, Memphis, TN 38105. To express condolences and to participate in Mabel’s online tribute, please visit www.DolbyBlaisSegee.com

WESTBROOK - Mabel Mae Landry, 96, died peacefully August 23, 2021 at her home at Stroudwater Lodge. Born January 21, 1925, to Andrew and Mary Johndro in Limestone on the family potato farm, the youngest of 14 children. Her mother died when... View Obituary & Service Information

The family of Mabel Mae Landry created this Life Tributes page to make it easy to share your memories.

Send flowers to the Landry family.