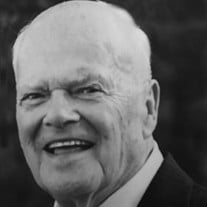 WESTBROOK-- Lucien C. LeBel, 92, died on October 31 at the Gosnell House from natural causes. He was an amazing man, husband, brother, father, grandfather, and friend! Lucien was born in Portland on March 10, 1928, the second son of Bernadette Laberge and Lucien LeBel. His family returned to Quebec until he was 6 then settled in Westbrook. At 13, he was awarded a prestigious scholarship to Jesuit-based St. Charles College in Quebec. His education was cut short by a brief illness and upon returning to Maine at 15, he joined the shipyard and trained to be a welder. Drafted at 18, he travelled to Korea by way of a liberty ship. When he returned to the states, he started working at Guy Gannett Newspapers as a clerk typist. Fluent in French, he quickly secured a position as a classified ad salesman and sold advertising to all the French speaking customers from greater Portland to York county. He retired in 1993 after a successful 40 year advertising career at the Portland Press Herald. In 1953, Lucien married the love of his life, Lorraine Williams (he told her the first day they met that he was going to marry her!). They settled in Westbrook where they raised four children. Active in his community and church, he was president of the school board at St. Hyacinth where he raised funds for a new science lab. An avid reader, he also served many years on the Walker Memorial Library Board. He was a founder of the Old Boots hockey team and enjoyed playing ice hockey until he was 80 years old. He and Lorraine loved music and dancing and it became an important part of their household as they raised their children. They spent every Saturday night dancing first at the OOB pier listening to Louis Armstrong and Jimmy Dorsey and in later years at the Elk’s Club where they danced so many Saturday nights away to the Don Doane Band. After retirement, he also continued to be active in daily walks with Lorraine, playing hockey, skiing, golf and tennis. Our family spent many happy summers at Penessewassee Lake in Norway and later at the family camp on Sebago Lake. Lucien and Lorraine also travelled to Florida in the winters, until Lorraine’s death in 2006. A devoted father and grandfather, he was our biggest cheerleader! He never missed a game or performance. He occasionally enjoyed a fine cigar with his grandsons. For years, his grandchildren looked forward to his birthday cards which always included lengthy handwritten personal notes including the best advice, a word of encouragement and how proud he was of us all. He was most happy when he was sitting in a lawn chair at the lake with a cold beer in his hand, a cigar, and our family all around— he would just smile! Dad always impressed upon his children and grandchildren, the importance of education, of faith, of music, and mostly the importance of taking the time to gather— with family and friends. He taught us how to cherish others, to give willingly, to dance, to work hard, to keep trying, to pray, to forgive, to laugh and to embrace life and each other, every day. He is survived by his sister Vickie LeBel of Scarborough and his loving companion for the past 6 years, Irene Mulkern. He is also survived by his children and their families: Susan and John Mullen, Judy and Earl Cutter, Chris and Kathie (Brocato) LeBel, and Jeanne and Tom Lavoie. His legacy of grandchildren and great grandchildren includes: Kate (Mullen) and Reggie Malloy and sons Ben and Mac, John and Elizabeth (Beaulieu) Mullen and sons Mickey and Xander; Kirk and Alex (Koocher) Mullen and daughters Lucy and Eleanor, and Cameron Mullen. Ben and Marissa (Regan) Cutter and children Grady and Haley; Andrew and Laura (Schulz) Cutter and daughter, Hazel; Megan Cutter and fiance, Anthony Savino and their son, Dominic. Nick and Sue (Bennett) LeBel and sons Oscar and Isaac. Ellie Lavoie, and Chris and MacKenzie (Parker) Lavoie and daughter Viola. He is predeceased by his brothers Gerard LeBel, Roger LeBel, and sisters Theresa Murdock and Jeannette Gagnon. The family would like to extend a heartfelt thanks to the staff at the Gorham House where he resided for the last few years. A memorial celebration will be planned next year sometime on a nice, warm, healthy, sunny, summer day. We wish we could be with everyone who knew him to celebrate the profound impact he has made on all our lives but for now, tonight, in memory of our Dad— dance with someone you love! (Suggested music: Mack the Knife). The family will be holding a private Mass of Christian Burial. Arrangements are in the care of the Westbrook Chapel of Dolby Blais & Segee, 35 Church St., Westbrook, ME 04092.

WESTBROOK-- Lucien C. LeBel, 92, died on October 31 at the Gosnell House from natural causes. He was an amazing man, husband, brother, father, grandfather, and friend! Lucien was born in Portland on March 10, 1928, the second son of Bernadette... View Obituary & Service Information

The family of Lucien C. LeBel created this Life Tributes page to make it easy to share your memories.

Send flowers to the LeBel family.