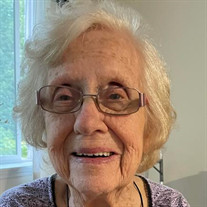 Louise Bell- Erickson passed away September 2nd after bravely battling dementia. Louise was pre-deceased by her mother Beatrice Chase, brothers Robert and Fred Chase, son Robert Bell, husbands Charles Bell and Harold Erickson, grandchildren Nathan Ames, Bobby Black, and Arron Bell. Louise is survived by sister-in-laws Barbara, Dianne and Micky, brother-in-law Bucky and Dickie and Louise’s children, Carol Black, Russ Bell, Richard Bell, and Peggy Bell. She is also survived by daughters in law, Tammy Randall and Kathleen Bell, and grandchildren, Brandon, Chris, Corina, Larry, Kaitlyn, Kayla, Kyle, Ryan, Samantha, Shawn, Steven, and many great grandchildren. Graduate of Falmouth High in 1953 Louise married Coastguardsman Charles Bell and started their family of five children. Charles built his family’s home on Blackstrap Road in Falmouth with father-in-law Bill and brother-in-law Fred. Upon sale of this home the family settled on Oakhill Road in Standish where the kids flourished among friends of the hill. Pretty sure Louise had many restless nights raising five kids in the wilds of Maine. While the kids were out climbing mountains by foot or by truck, Louise always had a hot farm-based meal on the table or warming in the oven upon their return. Sometimes chicken and dumplings, other times weird Maine favorites like fried smelt or cow’s liver and onions. And oh could Louise bake! She made the very best Blueberry cake ever! Year after year her kids and grandkids looked forward to that Blueberry cake arriving in the mail for their birthday. What a treat! Louise earned her CNA at SMVTI, now SMCC in South Portland. Her career began at the Barron Center caring for women and in Standish, caring for Miss Buzzell in the spare room in the farmhouse, and we are pretty sure her fabulous cooking kept Miss Buzzell alive many additional years. She went on to work at the Gorham House and also worked private duty cases. In the 80’s Louise knew tragedy as she lost her first grandson, Nathan, to a car crash on route one in Scarborough. Post-accident, mandatory seatbelt laws came into force in Maine in 1995. Also, in the 80’s she tragically lost her Texan grandson Bobbie to SIDS. Heartbroken, Louise and Charles carried on together until 1987 when Charles died in the hospital of a heart attack which was a complication developed from the debilitating effects of asbestos lung damage. In 2005 Louise lost her Californian grandson Arron due to complications from being struck by a car in a hit and run. Upon Charles’ death Louise mourned for several years before meeting her second husband Harold. Together they danced the foxtrot and jitterbug, golfed, and traveled. When Harold asked Louise to golf, he told her to practice driving the ball and when she was good enough, she could golf at Riverside. Determined to make it to Riverside, Louise drove the ball over and over at her son’s home on Cape Road. She would hit the ball and Princess would chase it and pick it up to bring back to her. Once she could drive the ball straight, something Peggy witnessed as they golfed together, Louise and Harold golfed every chance they could and had many golf friends sharing lots of fond memories. In 2012 and 2013 Louise lost her son Robert who died from a heart attack and husband Harold from metastatic lymphoma. Fortunately, Louise had many friends including Pam and Mary and many other golfing buddies. Good friend Joanne was the go-to person with PCALs singing group and also a walking partner. Priscilla checked all the boxes as the sister she never had, and they shared many fond memories with trips and bingo included. Louise lived happily on Murray Street until August 2020 when her dementia began to take over, and she moved to Birchwood’s Assisted Living. There she met Ralph and they enjoyed the next year together, both dancing and watching her favorite TV shows, Ellen and Dancing with the Stars. We are grateful to Ralph and the staff for filling in the year during a difficult time of Covid 19 protocols. We are also grateful for the medical staff at Maine Medical and Southern Maine Hospice Care for their help during this difficult time. Louise will be laid to rest at a public graveside service September 12th at 2:00p.m., at the Dow Cemetery in Standish. Friends and family are encouraged to join us. So far it looks like it will be mostly sunny and 72 degrees. There will be seating available graveside.

The family of Louise Bell-Erickson created this Life Tributes page to make it easy to share your memories.

Send flowers to the Bell-Erickson family.