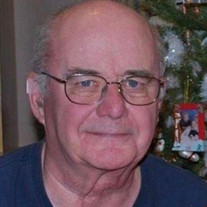 Lloyd Neal Murphy Senior, 80, of Windham, passed away on April 3, 2022. He was born on March 7, 1942 to Luther and Alice Murphy of Skowhegan, Maine. Lloyd graduated from high school in 1960 and came to Windham to serve an apprenticeship at Windham Mill Work. In 1961 he married Judith Lee Perry. They were joined by their first son Lloyd II in 1962, followed by their second son Steven in 1964 and Jeffery in 1966. Lloyd was one of the founding members of the Windham Rescue in 1965. He also served as a volunteer fire fighter. Lloyd began his law enforcement career in Windham as a reserve officer. He then went on to become a Westbrook Police Officer, serving for 22 years. After retiring from the police force, he started his own business, LNM Cabinetry, where he created countless beautiful pieces of furniture and other wood projects. Lloyd joined the Fire Police in Windham serving the community for nearly 25 years. Lloyd was very proud of his many years serving the community as a first responder. Lloyd was a member of the Church of Jesus Christ of Latter-Day Saints in Windham. His example of service was also evident in his 47 years as a clerk for the church. Lloyd was predeceased by his eldest son, Lloyd Neal Murphy II in 2019. On March 10th 2022 his childhood sweetheart, Judy, of nearly 61 years passed away. Lloyd is survived by his sons; Steven, and his wife Ruth, of Windham, and Jeffery, and his wife Julie, of Harrison. Lloyd was also the proud grandfather to six and great grandfather to three. Lloyd is survived by his siblings, Warren, and his wife Nancy of Madison, Maine, Ann, and her husband Steve Macbeth of Fort Colins, Colorado, and many nieces and nephews. Services will be held at the Church of Jesus Christ of Latter-Day Saints on River Road in Windham on April 23, 2022. Visiting hours will be from 10:00am to 11:00am with Services beginning at 11:00. Burial will follow the service in Mayberry Cemetery in Windham, where both Judith and Lloyd will be laid to rest. Please use the following zoom link to virtually attend Lloyd's service. https://zoom.us/j/94416782301

Lloyd Neal Murphy Senior, 80, of Windham, passed away on April 3, 2022. He was born on March 7, 1942 to Luther and Alice Murphy of Skowhegan, Maine. Lloyd graduated from high school in 1960 and came to Windham to serve an apprenticeship at... View Obituary & Service Information

The family of Lloyd Neal Murphy Sr. created this Life Tributes page to make it easy to share your memories.

Lloyd Neal Murphy Senior, 80, of Windham, passed away on April...

Send flowers to the Murphy family.