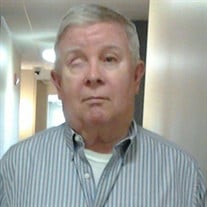 One less good person... Leslie A. Bennett of Ash Street, Westbrook Maine passed away in his sleep at The Pine Point Assisted Living facility early Monday morning, the 23rd of August, 2021. Born at home in Freeport on May 3, 1944 to William and Georgia Bennett, Les began life with severely limited vision, an obstacle he would struggle against for the next 77 years. Starting school a year late due to early operations in both eyes he attended regular classes and 12 years later graduated from Freeport High School alongside his classmates. This would be the first of many examples of him not letting his perceived handicap hold him back. After high school, Les attended Bliss and Husson Colleges in Lewiston, obtaining his bachelors in business degree from Husson College in the Fall of 1967. Following college he worked briefly at a shoe shop, a bank, as a security guard and at a construction company. Each time it was determined that his disability left him unable to perform the required tasks adequately/safely. In September of 1968 Les began working for the State of Maine Department of Health and Human Services in their Portland office, calculating the benefits of those applying for assistance. Passing the Social Workers exam the following year Les became a counselor for the WIN Program, which helped people with training, employment, transportation and childcare. In 1974 he was promoted to supervisor of the program, a position he would keep for 22 years until he medically retired in 1996 due to complications from further eye surgeries. Undeterred by this, he began volunteering for the IRIS network putting mailing labels on envelopes until their mail delivery program was discontinued. Handed a mandolin at an early age, Les immediately took to playing music, playing with family, friends and at parties. He grew as a musician and went on to play bass, rhythm and lead guitar in various local country bands throughout the ‘60s, ‘70s and ‘80s. He continued to play and teach guitar for the remainder of his life. As in his professional life, in his personal life Les looked for ways to improve the life of those around him. Whether snow blowing a neighbor’s driveway, helping his son build a garage, or jotting a note to a grandchild having a rough time in school, Les would always do what he could to make things a little better. Over many years Les has written numerous poems, short stories and observations for friends and family. These were gathered together in a series of books printed for him by his family and shared with friends and neighbors. Les’s lifetime of accomplishments would be praiseworthy for a fully sighted man. They become truly amazing considering the hurdles he overcame as one with limited to no vision. He was a positive, never wavering force who was admired and emulated by everyone for his spirit. The world is truly with one less good person... He is survived by his wife of 51 years, Elaine Bennett of Westbrook, ME; and their children, Rick (and Debra) Whitcomb – Phoenix, AZ, Randy (and Jane) Whitcomb – Gorham, ME, Ron (and Annette) Whitcomb – Windham, ME and Helen Whitcomb – Gorham,ME. Along with 7 grandchildren, Andrew Whitcomb, Matthew Whitcomb, Desirae Alexander, Kamron Alexander, Taylor Whitcomb, Cory Whitcomb, and Ryan Whitcomb, all who love and miss him dearly. Visitation will be at 1 p.m., Sunday, August 29, 2021 at the Westbrook Chapel of Dolby, Blais & Segee, 35 Church Street where a Memorial Service will be held, 2 p.m. In lieu of flowers please send donations to the Animal Refuge League, 217 Landing Road, Westbrook, ME 04092, or online website is arlgp.org To view live stream of Leslie's serivce, please visit https://us06web.zoom.us/j/83889916475

One less good person... Leslie A. Bennett of Ash Street, Westbrook Maine passed away in his sleep at The Pine Point Assisted Living facility early Monday morning, the 23rd of August, 2021. Born at home in Freeport on May 3, 1944 to William... View Obituary & Service Information

The family of Leslie Alvin Bennett created this Life Tributes page to make it easy to share your memories.

Send flowers to the Bennett family.