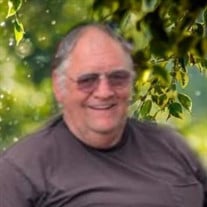 Larry Adair Huff, 75, of Westbrook, passed away on January 19, 2021. He was born on March 27, 1945 to parents Rufus and Vera (Stewart) Huff. Larry was born in Bath, Maine, relocated to New Hampshire for some time and was stationed at Grand Forks Air Force Base in North Dakota. It was in Grand Forks where he met his wife Cheryl. The two were married in Portland, Maine in 1964 and went on to have two sons, Tony and Nick. Larry was a loving, kind, funny, compassionate man with his utmost priority being his family. He had a big personality and was always telling jokes. He got great joy from making his friends and family laugh. Larry built Hi-Performance car engines by trade and loved running his own speed shop for many years. Larry was a Drag Racer for over 50 years before he retired his driving over to his boys but remained active in drag racing with them, which he was very passionate about. He loved camping and fishing in his free time, especially at Cousin’s Bridge in Yarmouth with his friends, sons, and granddaughters. Larry is survived by his sons: Tony and his wife Becky of Westbrook, Nick and his wife Rhonda of Windham; Grandchildren, Jessica Grosz, and her husband Tanner of South Dakota, Chelsea Huff of Windham, Rebecca Huff and her mother Debbie of Windham, Gavin and Brynn Grosz of South Dakota; His companion, Cindy Henninger of Standish; Siblings: Stephen Cady and his wife Laurie of Portland, Donna Leavitt and her husband Marlon of Westbrook; Brother-in-Laws: James Anderson of South Carolina; John Anderson of Kansas. Nieces and Nephews: Melissa, Matthew, Casey, Tyler, Amanda, Trisha and Shelly, and many great-nieces and nephews. Larry was predeceased by his beloved wife of 47 years Cheryl and his parents, Rufus Huff and Vera Cady. Visiting hours for Larry will be held on Thursday, February 11, 2021 from 5:00pm to 7:00pm. A graveside service will be held on Friday, May 7th at 11am at Woodlawn Cemetery in Westbrook with a Celebration of Life to follow at 2 Millpond Dr., Windham.

Larry Adair Huff, 75, of Westbrook, passed away on January 19, 2021. He was born on March 27, 1945 to parents Rufus and Vera (Stewart) Huff. Larry was born in Bath, Maine, relocated to New Hampshire for some time and was stationed at Grand... View Obituary & Service Information

The family of Larry Adair Huff created this Life Tributes page to make it easy to share your memories.

Send flowers to the Huff family.