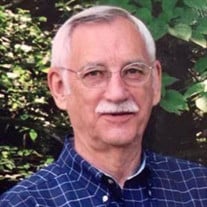 WESTBROOK - Kenneth H. Rich, 89, of Westbrook, Maine passed away on December 18 after an extended illness, spending his last few days with his beloved family at his side. Ken was born in Brewer, Maine, to Edith and Howard Rich, and grew up in Eddington. After graduating from Brewer High School in 1950, he married the love of his life, Marian Janet Kennedy of Portland, Maine. Together, Ken and Marian raised three children in Westbrook, and were fortunate enough to recently celebrate 65 incredible years of marriage. Ken viewed his marriage to Marian as a blessing and would often tell her and their family, “It’s been quite a journey!”. When Marian told Ken, “I Love You”, his response would always be, “Love You More!” Ken was a long-time member of Prides Corner Congregational and Westbrook-Warren Congregational Churches, and he was a frequent volunteer assisting churches and other charitable organizations. In addition to various real estate endeavors he and Marian developed over the years, Ken worked for A&P Grocery before partnering with Marian to build their own manufacturing business, Rich Insulation, in Windham, Maine. Ken and his family had multiple pets over the years, but he had an extremely close bond with his black Labrador retriever, Finian, who would accompany him to work every day. Ken was known by everyone as a kind and giving individual with an unrivaled work ethic, but most of all, a loving family man who lived a full and remarkable life. He enjoyed building and fixing things, riding on his tractors and watching wildlife in their yard, but his greatest joy was spending time with his wife, children, and grandchildren. Some of his favorite times were summers at their camps on Sebago Lake, Parker Pond, and later Long Lake in Naples. They were places of beautiful memories with family and friends, and Ken was always in charge of the grill at lunchtime. Ken was an active member of the Maine 3-Railers, collecting model trains, a hobby that took over his entire basement and enjoyed by all who visited. Members viewed Ken as someone they could always count on to help with their events across the state and he made lasting friendships. Ken was predeceased by his parents and his brother, Bernie Rich, and sister, Lorraine Birrell. Ken leaves behind his wife, Marian, as well as his children: Philip Rich of Gorham, Lynda Walsh and her husband Dan, of Falmouth, and Stephen Rich and his wife, Kelly, of Windham, as well as his grandchildren: Jordan and his wife Meagan, Zachary and his wife Janessa, Christopher, Meghan and her husband Andrew, Emily, Kayla, Sean, and a great-grandson, Cameron, as well as many loving relatives and countless friends. Although the nickname could not be further from the truth, Ken was playfully known as “Grumpy” to his grandchildren. They viewed him as the best Grampy in the world and are sure he is now in heaven; tinkering in a workshop, drinking coffee with his train buddies, or having breakfast with his friends of the Grumpy Old Men's Club. Ken’s family would like to especially thank his many caregivers at Maine Medical Center and Stroudwater Lodge for the loving manner in which they cared for Ken in recent months. A private celebration of Ken’s life will take place at a later date. In lieu of flowers, memorial donations in Ken's name may be made to: Prides Corner Congregational Church, 235 Pride St., Westbrook, Maine.

WESTBROOK - Kenneth H. Rich, 89, of Westbrook, Maine passed away on December 18 after an extended illness, spending his last few days with his beloved family at his side. Ken was born in Brewer, Maine, to Edith and Howard Rich, and grew up... View Obituary & Service Information

The family of Kenneth H. Rich created this Life Tributes page to make it easy to share your memories.