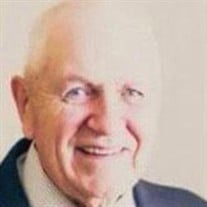 WINDHAM - Kenneth Ralph Meserve, Sr., 88, departed this life while surrounded by the love of his family on December 15, 2021. Kenneth was born December 31, 1932 in Saco, Maine to Ralph P. Meserve and Mertie (Huston) Meserve. Kenneth was a dairy farmer on his family farm Meserve Dairy on Ferry Road in Saco before entering the Army. He always found a way to continue to farm by working seasonally at a potato farm and frequented his close friends dairy farm. He retired after over 20 years from the Town of Cape Elizabeth as the Public Works Supervisor spending many over nights plowing the streets during the winter time. He especially loved his three children as well as his grandchildren and great grandchildren, spending countless hours making wonderful memories always making sure he was there for holidays and special occasions. Kenneth leaves to cherish his memory his daughter, Mary Kay Sanborn her husband, Jeffrey; and their children, Zachary and Hannah; his son, Kenneth R. Meserve, II; and his daughter, Emma and her husband, Isaac; his youngest daughter, Barbara K. Meserve Johnson her husband, William; and her daughters whom he helped raise, granddaughter, Ariel E. Murphy and her husband, Eli; and their children; Kenny, Titus and Madeleine; as well as his granddaughter, Marina Dionisio and her husband, Andrew M.; and their child, Nathaniel. In addition to his parents; he was predeceased by his four siblings; and his daughter, Sherry Anne Meserve. In lieu of flowers, memorial donations may be made to Alzheimer's Association and mail to 8180 Greensboro Drive, Suite 400., McLean, VA 22102.

WINDHAM - Kenneth Ralph Meserve, Sr., 88, departed this life while surrounded by the love of his family on December 15, 2021. Kenneth was born December 31, 1932 in Saco, Maine to Ralph P. Meserve and Mertie (Huston) Meserve. Kenneth was a... View Obituary & Service Information

The family of Kenneth Ralph Meserve Sr. created this Life Tributes page to make it easy to share your memories.