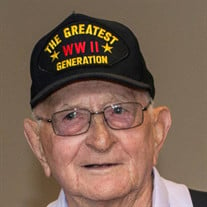 Westbrook Kenneth “Butch” Doucette left the world he so loved on July 24th. He was born in Westbrook the son of James F. Doucette and Eda V. Phillips He was proud of the fact that he was a direct descendant of the original settlers of Prince Edward Island. On September 1, 1949 he married Joanne Crosby his wife of nearly 71 years. He lived most of his life in Westbrook, and summers at his camp in Kettle Cove, Casco, retiring from S.D. Warren in 1988. During the winters he also drove oil trucks for CA Hughes Oil Company, during the summers be painted houses with his brother Nealy . He was also a volunteer Fire fighter for the City of Westbrook. After retiring he worked many years for Kate’s Butter. He enjoyed his trips to Aruba, Las Vegas, and Florida with his wife and children.A member of the greatest generation he lived through the Great Depression as a child. A true patriot he joined the Navy as a Sea Bee and served in World War II. At the age of 18 He served aboard the Josiah Snelling. He earned a Purple Heart when On the 27th of May, 1945 while docked at Nakagusuka Bay in Okinawa his ship was hit by a kamikase suicide plane. The explosion covered him in fuel, set him afire, and blew him off the ship into the bay. Somehow he survived. He spent many months recovering from his injuries in hospitals. While recovering, unknown to him, his mother died back in the states. He was very proud of his service to his country and was always flying American and Sea Bee flags at his house.He was predeceased by his 4 sisters, Beatrice Teidwell, Doris Nickerson, Emily Ferris, and Theo Arsenault, and his 2 brothers, James “Nealy” and Carroll “Skinny” Doucette. He is survived by his wife of 70 years Joanne Crosby Doucette, his children Robert and spouse Peggy of Westbrook, James of Casco, and Wendy Smith Wilcox and spouse Larry of Westbrook. His grandchildren Daniel Doucette, Rebecca Sladen, Rose-Ann Kennedy, James Doucette, Karla Caldwell, Cory and Craig Smith. Also by his beloved great grand children Abigail and Jacob Sladen, Amber Roy, Isabelle Doucette, Mattaia Doucette, Kameron and Aiden Caldwell, and Cassidy and Noah Smith. And many nieces and nephews. The family would like to thank Southern Maine Hospice, in particular his visiting nurse Phil Mccormick, who's compassion and caring are beyond description. A graveside service with military honors will be held at 11AM Friday July 31, at Woodlawn Cemetery, Stroudwater Street, Westbrook. Those wishing to remember Butch may make gifts in his name to Wounded Warrier Project, P.O. Box 758516, Topeka, Kansas 66675-8516 or go online to www.woundedwarriorproject.org/donate.

Westbrook Kenneth &#8220;Butch&#8221; Doucette left the world he so loved on July 24th. He was born in Westbrook the son of James F. Doucette and Eda V. Phillips He was proud of the fact that he was a direct descendant of the original settlers... View Obituary & Service Information

The family of Kenneth "Butch" Doucette created this Life Tributes page to make it easy to share your memories.

Kenneth “Butch” Doucette left the world he so loved...

Send flowers to the Doucette family.