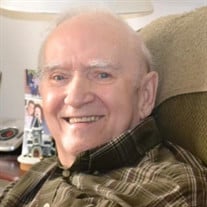 PORTLAND - Kendall Ray Conant Sr, 92, passed away peacefully on Dec. 26, 2021 with his wife Pauline by his side. He was born in Westbrook to Eugene Linwood Conant and Mabel Anna O’Halloran Conant on Aug. 30, 1929. He grew up in Westbrook, attended Westbrook schools and attended Camp William Hinds as a Boy Scout. His life changed dramatically after losing both parents as a teenager. He left school to support his siblings and Grandmother Lucy Perrin Conant who was their caretaker. When he was eligible to enroll, he enlisted in the US Army and was deployed to Germany in the reconstruction effort after WWII. He proudly served in the 109th Transportation Truck Company as a truck driver during his years in Germany and was honorably discharged after this service to his country. He was descended from Roger Conant, the first Governor of the Massachusetts Bay Colony. His family was among the first settlers of New England, including one of Westbrook’s first settlers Joseph Conant who paddled a canoe up the Presumpscot River and built a home at Saccarappa Falls. He was employed for over 50 years at Pratt Abbott Cleaners and during this time he was introduced to Pauline Edna McDowell by fellow employee Beulah McDowell. Kendall and Pauline were married on June 18, 1955 and they celebrated their 66th year together last June. They raised five children in Kendall’s childhood home on Park Road in Westbrook. His wonderful gifts of humor, kindness, and empathy was one of a kind. He worked tirelessly for decades to show by example the importance of a job well done. His work ethic was unmatched as he cheerfully worked long days and weekends to provide for his family. He loved taking trips around New England to visit with extended family. He enjoyed water skiing and never refused an offer to go around the lake to the delight of his children watching him ski. He found peace and solitude in the woods of Maine in November while deer hunting with his friends. He was involved in local candlepin bowling leagues, square dancing and a proud long time friend of Bill W. He humbly taught his children to find their own way in life, to set a goal and then work hard to obtain it. He was predeceased by his siblings Dolly Graves, Maurice Conant, Norma Grant and Sally Mancini, son in law Douglas Ashby and grandchildren Tamra, Laura, and Amanda Ashby. He is survived by his wife Pauline, his children Kendall Jr and his wife Kristin, Kimberly Ashby, Paula Arsenault, Penny Arsenault and her husband Peter and Kevin and his wife Carol. He is also survived by his grandchildren Michael Conant, Kendall Conant III, Allen Conant, Nicholas Arsenault, Alex Arsenault, Grace Conant and Anthony Conant; his great grandchildren Bailey Conant, Jacob Conant, Hannah Conant, Calvin Conant, Benjamin Conant and Kingston Conant. His family would like to extend their deepest appreciation to the staff at Seaside Healthcare. A celebration of life will be announced in the coming months. In lieu of flowers, his family requests you please send donations to the Barbara Bush Children’s Hospital.

PORTLAND - Kendall Ray Conant Sr, 92, passed away peacefully on Dec. 26, 2021 with his wife Pauline by his side. He was born in Westbrook to Eugene Linwood Conant and Mabel Anna O&#8217;Halloran Conant on Aug. 30, 1929. He grew up in Westbrook,... View Obituary & Service Information

The family of Kendall R. Conant, Sr. created this Life Tributes page to make it easy to share your memories.