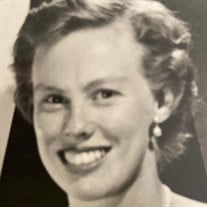 RAYMOND – Kathryn Virginia Wallace – “Ginger” to her family and friends – died June 12, 2021. She was 96 years old. Ginger was the loving wife of James D. Wallace, who died in 2004 just a few days shy of their 52nd wedding anniversary. A longtime resident of Raymond, Ginger was born and raised in New Jersey, where she graduated from Millburn High School. She attended college at Denison University in Ohio, where she was vice president of Alpha Phi sorority and president of Franco Calliopean, an honorary literary society. After graduating college, Ginger was the editor of several weekly newspapers in New Jersey, one of which won the New Jersey Press Association award for Best in Class several years in a row. In 1952 Ginger married James Denithorne Wallace of South Orange, New Jersey. Together, Ginger and Jim raised two sons, Jim Jr. and Bob. The Wallaces belonged to the Lake Hopatcong Yacht Club, where Ginger crewed for her husband in Lightning and Thistle class sailboat races. While raising her family she was a cub scout den mother, a PTA president and a church choir mother. She also served as treasurer of her church’s altar guild. After her sons had grown, she wrote newsletters and other publicity for the Millburn-Short Hills chapter of the American Red Cross and other organizations. In 1993 Ginger and her husband moved to Raymond. She served as president of the Raymond Village Library and as a member of the Raymond planning board. She was also active in the Panther Pond Association and St. Ann’s Episcopal Church. For several years she and her husband were church Chalice Bearers. Her favorite activities included playing bridge with her friends, enjoying her flower gardens and taste-testing peppermint stick ice cream. Ginger Wallace leaves her two sons, Jim and his wife Vicki of Missoula, Montana and Bob and his wife Laurie of Raymond. She also leaves a grandson Adam Wallace of Windham; three step-grandchildren, Dan, Jackie and Lindsey Coffin; two step-great grandchildren, Quinn Ketzler and Owen Coffin; and several nieces and nephews. A service is scheduled at 11:00am on Friday, June 18, 2021 at St. Ann’s Episcopal Church, 40 Windham Center Road, Windham.

The family of Kathryn "Ginger" Virginia Wallace created this Life Tributes page to make it easy to share your memories.

RAYMOND – Kathryn Virginia Wallace – “Ginger” to her family and...

Send flowers to the Wallace family.