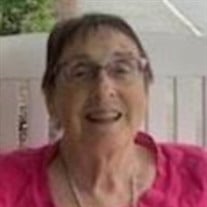 CASCO & GORHAM - Katherine Hawkes, 78, passed away Monday, January 17, 2022 at The Inn At Village Square in Gorham, after a long battle with cancer. She was born Katherine Hufnagel, in Pittsburgh, PA on April 18, 1943, daughter of Andrew and Kathleen (Wynne) Hufnagel. Kathie graduated from Mt. Mercy College with a BS in education in 1965 and joined the Peace Corps that same year. She met her future husband and fellow volunteer, Ronald Hawkes, in Peace Corps training and spent 2 years as a teacher in Shendge, Sierra Leone. She went on to get a Master’s Degree in Education from the University of Michigan at Ann Arbor. She married Ron in 1970 and the two moved to Tuba City, AZ, where they worked as teachers on the Navajo Reservation. Their first child, Joanne, was born in 1971 before moving back east and settling in South Portland. Their second child, Susan, was born in 1972, and then in 1975 they adopted Stephen Jang from Korea. The family moved to Casco in 1976 where they would live for the next 40 years. Kathie was a homemaker while her children were young, and then became a cued-speech interpreter for a deaf child in the Raymond school department. She followed this child right through to middle school and then became a first grade teacher in Raymond until her retirement. She was a very devout Catholic and enjoyed teaching CCD, lecturing, ministering to prison inmates, and becoming a member of the Ladies Guild at Our Lady of Perpetual Help Church. She also became a Dominican with the Community of the Resurrection in Otisfield. She was a Girl Scout leader and also enjoyed camping, swimming, reading, traveling, and especially spending time with her family. In addition to her husband of 51 years, Kathie is survived by her two daughters, Joanne (Hawkes) Cover of Stafford, VA, and Susan (Hawkes) Spofford of Westbrook; daughter-in-law, Luz (Remedios) Hawkes, of the Philippines; six grandchildren, Elizabeth and Evelyn Cover, Michael “Gus” and Matthew Spofford, and Rachel and Katherine Hawkes. She was predeceased by her son, Stephen Hawkes; grandson, Ethan Cover; and brother, James Hufnagel. Visitation will be held 6-8 p.m., Monday, January 24, 2022 at the Windham Chapel of Dolby, Blais & Segee, 434 River Road. A Mass of Christian Burial will be held 11 a.m., January 25, 2022 at Our Lady of Perpetual Help, 919 Roosevelt Trail, Windham, ME 04062. Burial at Calvary Cemetery, South Portland will be private for family. In lieu of flowers, the family requests that donations be made in Kathie’s name to the Community of the Resurrection, P.O. Box 284, Casco, ME 04015.

CASCO & GORHAM - Katherine Hawkes, 78, passed away Monday, January 17, 2022 at The Inn At Village Square in Gorham, after a long battle with cancer. She was born Katherine Hufnagel, in Pittsburgh, PA on April 18, 1943, daughter of Andrew and... View Obituary & Service Information

The family of Katherine Elizabeth (Hufnagel) Hawkes created this Life Tributes page to make it easy to share your memories.

Send flowers to the Hawkes family.