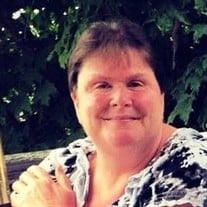 GORHAM – Karen “KK” Sue (Dahms) Brown, 56, passed away unexpectedly on November 20, 2020, at her home, due to natural causes. Karen was born on June 17, 1964 to Wally and Ellie Dahms. She was their third child and the baby of the family. She grew up in Westbrook with her brother, Kenny and sister, Kim. She was a proud member of WHS class of 1982. She met the love of her life, Chris Brown (of Rockland), in early 1985. They hit it off immediately and began to make their life together. They were married in a beautiful outdoor ceremony at her parent’s home in Raymond on August 2, 1986. Karen was always the happiest with a baby in her arms, and she was born to be a mother. Her dream came true in 1987 when she gave birth to her first daughter, Amber. Her love of being a mom expanded in 1990 with the birth of her second daughter, Aimee, and it grew twice more in 1995 with one of the best surprises of her life, twin boys, Jacob and Zackerie. Karen moved to Gorham in 1994 where she built a home and raised her family. She was a fierce Mama Bear who worked tirelessly to make sure her children wanted for nothing. She was proud of all of her kids, and her love was loud. She could often be heard boasting that her children were her biggest and best accomplishments. She spent most of her career in the healthcare industry and was a dedicated professional who prided herself on her work. She was usually the first face that a nervous or upset patient would see but her calm demeanor, friendly attitude, and warm smile could put anyone at ease. Behind the scenes she was a workhorse who could remember important details without writing a word down and ran circles around others to keep everything running like a well-oiled machine. She was often recognized for going above and beyond and was adored by her colleagues and patients. Karen loved music and probably blew a speaker or two in her car by blasting old favorites from Rod Stewart, Foreigner, and REO Speedwagon. You always knew she was coming before she got there because you could hear her first. It was not the holidays in the Brown home until you sang along with Mary’s Boy Child or The Maine Christmas Song at ear splitting decibels. She was a woman who truly enjoyed the simple things in life. In the Summer you could find her at the beach slathering on the tanning lotion, keeping a watchful eye over all the kids. This never changed even when the kids had kids of their own. She loved romantic movies, jewelry, beanie babies, animals, game nights, seafood, reality TV, sweet treats, Sand & Sable perfume, collecting pearls and stones, Vera Bradley purses, giving out the most thoughtful gifts, her prized “Bentley”, and was never too far away from a cold diet Pepsi. She was a social butterfly and the life of any party. Her laugh was genuine, booming, and infectious. She laughed often because she had an uncanny ability to find humor no matter the situation. This was especially true in 2011, when she was diagnosed with breast cancer. Being the fighter she was, she faced it head on and won the battle. She was honored to walk at the 2012 Relay for Life as a survivor. She truly embodied the philosophy of never judging a book by its cover. She was genuine and didn’t believe in “putting on airs” to impress people. What you saw was what you got. Her positivity, strength, empathy, kindness, and nurturing nature made her a foundation for her entire tribe. Although those who mistook her kindness for weakness were always surprised when she came back swinging. She found the most joy in her family and in the many friendships she made throughout the years. Karen had close relationships with her parents; brother, Kenny; and especially her “Sistah”, Kim. They raised their children together and apart from being a mom, she was a trusted confidant, partner in crime, best friend, and “Aunnie.” She was a wonderful cook and her Italian pasta salad, meatloaf, mac and cheese, and tuna casserole were always in high demand. In the neighborhood she was simply called Goodie. The only thing Karen loved more than being a mom, was being a nana to her grandson, Benson; and being Auntie KK to her great-nieces Kimber, Isobel, Maddie, Ellie; and nephews, Ayden, AJ, and William, with whom she was especially close and who were the light of her world. Despite the rough hands she had been dealt, Karen was never afraid to always go all-in with her whole heart. She was larger than life itself, intuitive, and selfless. Her spirit is deeply and forever imprinted within all those that love her. Our universe will never be the same. Rest in Paradise, our sweet KK. In addition to her beloved parents, Karen was predeceased by her mother and father-in-law, John and Priscilla; and her dog, Sophie. In addition to her loving husband of 34 years, she is survived by her four adult children; her daughter-in-law,Hannah; her grandson Benson Brown; brother, Kenneth and his wife, Diane; sister, Kimberly and her husband, Kevin James; nieces, Torrey and her husband, Tony, Andrea and her husband, Peter, Letha and her husband Dustin; nephews, Alan and his wife, Monica, Michael and his wife, Alyssa; her favorite “littles”, Ayden, AJ, Kimber, Izzy “Monkey Moo Moo”, Maddie, Ellie, and Willie Jay; her pups, Sadie and Sally; and many friends; cousins; aunts, and uncles. Details to follow regarding a COVID friendly and socially distant celebration of life. In lieu of flowers, please consider a donation to the Animal Refuge League of Greater Portland, 217 Landing Road, Westbrook, ME 04092 or helping a family in need this holiday season.

The family of Karen Sue Brown created this Life Tributes page to make it easy to share your memories.

Send flowers to the Brown family.