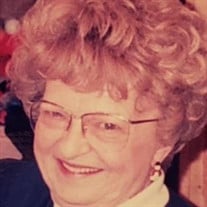 AUBURN—June W. Wear-Bridges, 87, passed away January 1, 2021 at Clover Manor in Auburn. She was born April 19, 1933, a daughter of Ralph Pierce and Marjorie (LeBaron) Lawrence. June grew up in Massachusetts where she attended school. Following her education, she was married to her first husband and traveled around the United States as a military wife while starting a family. June held various jobs, primarily in administrative roles. Later in life, she married Earl Bridges before his passing in 2004. June, known by her nickname and longtime vanity plate “June-Bug” could be seen wearing flip flops throughout every season of the year. She adored her teacup Yorkie, Toby, and was most relaxed while sipping on a glass of Crown Royale. She will be remembered for her spitfire personality by all who called her Ma. She is survived by her children, Sandra Gorman, June Dodge and her husband Robert, and Richard Wear and his wife Catherine; grandchildren, Keith Gorman, Tonya Dodge, April Wear, Nikki Wear, Shelly Getchell, Frank Wear, Wendy Viney, Amber Short, Nikki Short, John Sawyer, and Robert Murray; along with 13 great grandchildren. She was predeceased by two of her children, Sharon Wear, and William Wear; as well as her husband, Earl Bridges. Per June’s request, there will be no services. Arrangements are in the care of the Windham Chapel of Dolby Blais & Segee, 434 River Rd., Windham, ME 04062.

AUBURN&#8212;June W. Wear-Bridges, 87, passed away January 1, 2021 at Clover Manor in Auburn. She was born April 19, 1933, a daughter of Ralph Pierce and Marjorie (LeBaron) Lawrence. June grew up in Massachusetts where she attended school. Following... View Obituary & Service Information

The family of June W. Wear-Bridges created this Life Tributes page to make it easy to share your memories.

Send flowers to the Wear-Bridges family.