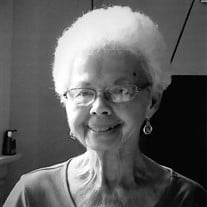 STANDISH-- June C. Gridley passed away peacefully from natural causes on February 6, 2021 at The Mooring in Scarborough, Maine. Born in Cleveland, Ohio in 1926, she attended local schools until enrolling in the Andrews School for Girls in Willoughby, Ohio and Western Reserve University in Cleveland. June was a flight attendant in the earliest days of air travel when she met her future husband, Theodore (Ted) G. Gridley. After a brief stay in Massena, New York, they settled in Portland, Maine, to raise their family of four: Guinevere, Elaine, Norman and Lance (James). A devoted and selfless wife and mother, June was passionate about the value of education, community service and working to one’s capacity. June and Ted worked together to raise their children, the youngest of whom became the first student to attend and graduate from local public high school long before laws mandated mainstreaming of disabled persons. Once the four children were in their late teens, June earned her Master´s Degree in Education which led to a rewarding career as a second-grade teacher in the Falmouth School System, where she taught for over twenty years. She invested her heart and her energy in each of her students, inspiring them to reach their full potential. June moved to the family farm in Sebago Lake upon her father’s death in 1978. Her husband, Ted subsequently passed after a short illness in 1983. Upon her retirement, June pursued her lifelong ambition of travel, visiting South America, Europe and Russia. It was her delight to visit historical and cultural sites and to take notes on all that she saw. She was a prolific reader and note-taker, striving to learn something new every day. She loved attending plays, local musical productions, listening to opera (with explanatory book in hand), listening to radio, following the TV news and watching baseball. June took a personal interest in all the people she met (family, friends, students, co-workers, church members, and neighbors) keeping detailed notes on their names, families, birthdays and interests. She spent hours reading, clipping and mailing thousands of articles, which she inserted in all manner of cards. Christmas cards took her weeks to write, as each contained a personalized message. June was physically active long into her retirement, volunteering at a local elementary school and library, then working as a bagger at a grocery store until it was no longer safe for her to drive. Fiercely independent, June’s favorite phrase came from the “Peanuts” cartoon strip, where Lucy stated: “I can do it myself!” Guinevere’s providing meals, transportation and daily company, allowed June to fulfil her desire to live at the family farm until the final few weeks of her life. In addition to her children, June leaves behind six grandchildren and three great-grandchildren. We want to provide a special thanks to the staff at The Mooring in Scarborough, Maine, who provided loving care to June during her final weeks. June will rest in peace at the Cedar Brook Burial Ground, in Limington, Maine. Arrangements are in the care of the Windham Chapel of Dolby Blais & Segee, 434 River Rd., Windham, ME 04062.

STANDISH-- June C. Gridley passed away peacefully from natural causes on February 6, 2021 at The Mooring in Scarborough, Maine. Born in Cleveland, Ohio in 1926, she attended local schools until enrolling in the Andrews School for Girls in... View Obituary & Service Information

The family of June C. Gridley created this Life Tributes page to make it easy to share your memories.

Send flowers to the Gridley family.