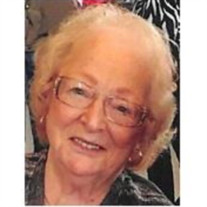 Scarborough, Judith (Judy) Ferris Richard (81) daughter of the late Oakley and Emily Doucette Ferris, of Portland, Maine, died peacefully at Gosnell Memorial Hospice House in Scarborough, Maine, on Sunday, July 11, 2021 after a brief illness. She was born on September 16th, 1939. Judy was known for her selflessness, and deep and undying love for her children, Gayle Richard, Raymond Richard, Christine Lothrop, Carol Dalpee, and Ron Richard. Judy had a special and strong relationship with her Lord and Savior Jesus Christ that she reveled in. Kindness and compassion were the core of Judy. She attended the Rock Church in Scarborough, where she always said that the music was "AWESOME, awesome, awesome!" She could be seen raising her arms to the Lord in praise, she had faith that could move a mountain and oftentimes did. Judy was an amazing life force and breathed positivity (day in and day out) no matter what the hardest of circumstances were. She was a no-nonsense, pick-yourself-up-by-your-boot-straps, no excuses kind of woman. She made the best of any and every situation. She was always joyful and found the good in everything and everyone. She was an unending advocate for her daughter Gayle and took the best care of her for all of Gayle's life. They were the very best of friends. Judy was heartbroken at Gayle's passing in 2020. She was an incredible and loving mother, and an incredible and loving grandmother, great grandmother, aunt, and friend. She loved to play Bingo and board games with her friends and found so much happiness in love and laughter. She enjoyed a good storm immensely and would often go to the lighthouses during a raging storm and watch the waves. Much like finding joy and beauty in a storm, she found the beauty in absolutely everything in life, she was a bright light whose beacon shone on all who knew her. She missed her daughter Gayle greatly, and her brothers David, Charles, and Leo Ferris, and her beloved dog Daisy, who had all passed away before her. She talked about how she was ready to see them again, and her family and friends have no doubt that she was met with hugs and "Hallelujahs!" at the pearly gates of Heaven. She is survived by her children, Christine Lothrop and husband Doug of Dixfield, Carol Dalpee, and husband Robert of Naples, and Ron Richard of Portland. She was loved and treasured by her grandchildren, Zach Donahue, Meghann Donahue, and Meghann's fiancé Jim Jasud, grandchildren Kayla Dalpee, Nicole Dalpee, Robbie Dalpee, Crystal Harris and great-grandchildren, Tucker and Madison Donahue, Ava Waugh, Logan Whittier, Evan Dalpee, Alex Dalpee, Hannah Ross, Gavin Dalpee, Rhylen Avery, Landon Dalpee, Farrah Harris, and her chosen family, Laura Landry. She leaves behind many loving nieces, nephews, great-nieces, and great-nephews. She will be sadly missed by all who were blessed to have her as a positive presence in their lives. There will be a private family graveside gathering at a later date. To express condolences or to participate in Judith’s online tribute please visit www.DolbyBlaisSegee.com

The family of Judith F Richard created this Life Tributes page to make it easy to share your memories.